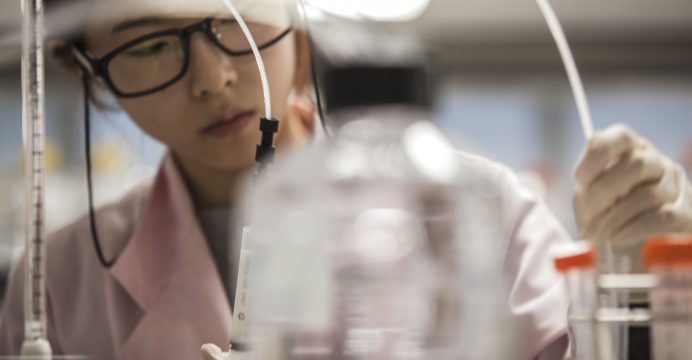 The Marketing Authorization Application (MAA) for SB5, an adalimumab biosimilar candidate referencing Humira®, has been accepted for review by the European Medicines Agency (EMA). The MAA for SB5 is the third anti-TNF biosimilar candidate to be submitted to the EMA by Samsung Bioepis, the joint venture between Samsung BioLogics and Biogen (Nasdaq: BIIB). Earlier this year, the European Commission approved BENEPALI® (etanercept), a biosimilar referencing Enbrel®, and FLIXABI® (infliximab), a biosimilar referencing Remicade®. “The submission of SB5 by Samsung Bioepis reflects the joint goal of the partners to take the lead in expanding access to high-quality biologic therapies for those living with chronic inflammatory disorders,” said Alpna Seth, Ph.D., Senior Vice President and Global Head of the Biosimilars Business Unit at Biogen. “At an estimated $4Bn a year, Humira is among the EU’s largest single drug expenditures, but access still remains variable in many markets. If SB5 is approved, we will have the potential to make a substantial impact by bridging this access gap for patients while supporting the sustainability of healthcare systems.”

The MAA is based on a robust preclinical and clinical data package comparing SB5 with Humira. The clinical data include results from two head-to-head studies – a Phase I study in healthy volunteers that demonstrated pharmacokinetic bioequivalence to Humira and a Phase III, randomized, double-blind, multicenter study, in which SB5 demonstrated comparable efficacy, safety, and immunogenicity to Humira in patients with RA. The primary endpoint of the Phase III study, the ACR20 score response at Week 24, was met, demonstrating equivalent efficacy to Humira. Secondary endpoints demonstrated that SB5 has a comparable safety and immunogenicity profile to Humira.