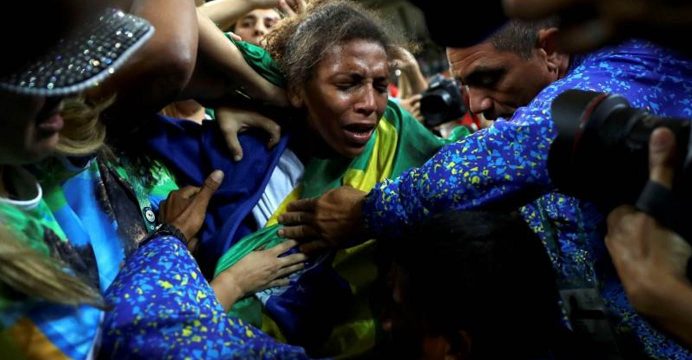 Brazilians celebrated in the stands after Rafaela Silva won gold in women’s judo at the Rio Games on Monday, claiming the first Olympic gold medal for the host country and capping a journey to the podium that began in one of the city’s most notorious slums, reports Reuters.

Silva raised her arms in triumph as she overcame top seed Sumiya Dorjsuren of Mongolia, following a pulsating semi-finals victory that went into extra time against London silver medallist Corina Caprioriu of Romania.

Gold for Silva marks a fairytale ascent to the Olympic podium from a childhood in Rio’s Cidade de Deus favela, made famous in the film “City of God.” 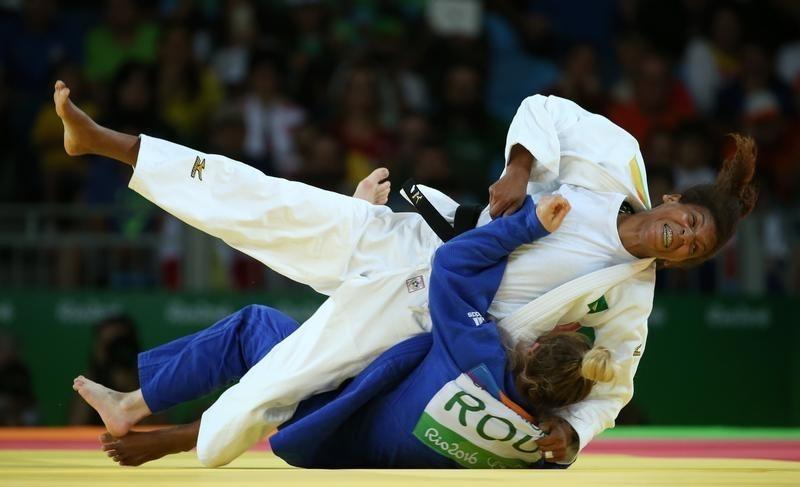 Following early years of trouble that saw her getting into fights in the neighbourhood, Silva found a structure to her life through judo and went on to attend the Instituto Reacao, founded by Olympic bronze medallist Flavio Canto.

“The fans have always encouraged me, especially the kids from my own community in the City of God,” Silva told reporters following her victory.

Silva’s medal, in the -57kg weight class, was also Brazil’s first in judo at Rio after strong contenders from its team were eliminated in the first two days of action.

Brazil is placing high hopes on its judo team to boost its medal haul in Rio after it took home four in the sport at the 2012 London Games.

“Of course, we would have liked to have won more medals but out there on the mat, everybody who goes out there is a worthy contestant and we hope that my medal will be adored and will open the way for Brazil to win more medals,” Silva said.

The Carioca Arena 2 was rocking on Monday as her supporters went into a frenzy each time she took the tatami, stomping their feet and chanting “Rafa” as tossed aside one competitor after another.

At the winners’ ceremony, she earned a huge roar of approval as she held up her medal for the crowd before bursting into tears as the Brazilian national anthem played.

“It’s amazing. We’re a country that’s had some problems. So it makes us so happy to see our flag up high,” said Gustavo Lima, a 42-year-old IT worker who was posing for a photo with his young son and cousin.

The women’s -57kg was among the toughest judo categories at Rio, featuring all four medal winners from the London Games, and there were several notable upsets.

Japan’s Kaori Matsumoto, world champion and London gold medallist, was stunned in the semi-finals and went on to settle for bronze.

France’s judo medal drought in Rio continued as London bronze winner Automne Pavia lost in the bronze medal match, while another London bronze medallist, Marti Malloy of the United States, suffered a shock early exit in the round of 16.