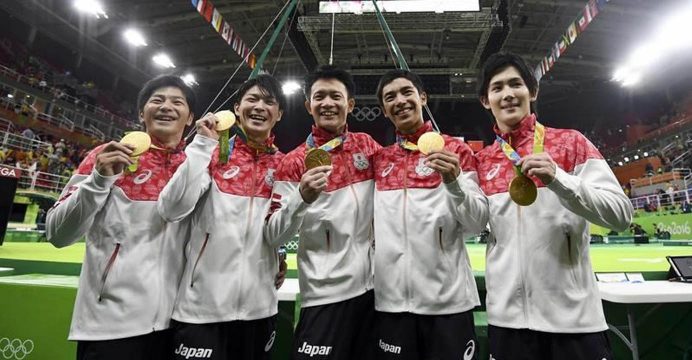 Not even the curse of the pommel horse could halt Japan’s march to the men’s team gymnastics title at the Rio Olympics on Monday as China’s eight-year reign as champions came to an end after a day of slips, trips and stumbled landings, reports Reuters.

Four years after Uchimura’s botched dismount from the pommel horse almost denied Japan a team medal in London, it looked as if the same apparatus would be their undoing again when Koji Yamamuro lost his grip and rolled off.

But unlike in 2012, when they ended up with silver behind China, Yamamuro’s score of 13.900 was their only blip in Rio as they put in a command performance on the remaining five apparatus to capture gold with a total of 274.094.

In a sport where tenths of a point can mean the difference between a gold medal and no medal at all, their total was 2.641 points more than surprise silver medalists Russia.

The Chinese team of Lin Chaopan, Deng Shudi, Zhang Chenglong, Liu Yang and You Hao sat back dejectedly in their chairs after Russia pipped them by 0.331 points to silver, with Zhang breaking down in tears afterwards backstage.

For all Uchimura’s past success, the men’s Olympic team gold was the one major medal missing from his vast collection, which includes the 2012 all-around title, a record six successive world all-around golds and the 2015 world team crown.

On Monday, he stood side-by-side with teary-eyed 2012 London Games survivors Yamamuro, Ryohei Kato and Yusuke Tanaka and the new kid on the block Kenzo Shirai in triumph, their index fingers raised to confirm their standing in men’s gymnastics.

“This was the event I really wanted to win gold in,” Uchimura said after Japan returned to the top of the Olympic podium for the first time since 2004.

“You really have to work on yourself to become number one.

“We came to Brazil to do what we are meant to do. Because we were able to do so, we won the gold. The next Olympics will be in Tokyo and I believe we can win again.”

China, who topped qualifying, had obviously saved their mistakes for the final.

Their failure to stick landings meant their hopes of completing a hat-trick of Olympic titles was over long before their final three competitors had mounted the horizontal bar.

In fact, they looked in danger of missing out on the medals completely after stumbles and falls on the vault, rings and floor exercise left them trailing in fifth place with two rotations to go.

However, they surged back with a strong showing in the parallel bars that lifted them into third with one rotation to go.

When Japan’s Kato, Shirai and Uchimura scored a combined 47.199 on their final apparatus — the floor exercise — China’s Deng, Lin and Zhang knew they would have to score more than 47.94 points on the horizontal bar to overhaul them.

Once Deng (14.400) and Lin (15.000) had completed their dismount, China knew it was game over as Zhang was left needing to do something that has never been done in gymnastics — score more than 18 points on an apparatus.

It was a day when not much went right for China, with the announcer at the Rio Olympic Arena hailing Liu Yang’s strong showing on the rings by saying “Deng Shudi looks delighted with his performance” and then having to watch their incorrectly-designed flag raised on the lowest pole after claiming bronze.

China, who also saw their 12-year reign as world champions ended by Japan last October, finished with a total of 271.122, behind Russia in second with 271.453.