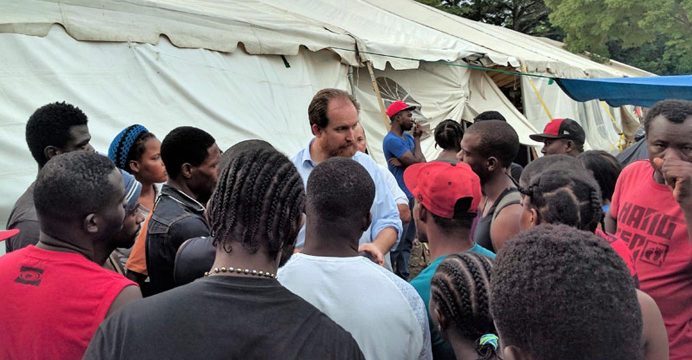 Between April 21 and August 3, Costa Rica registered the arrival of over 5,600 irregular migrants. The number has continued to rise over the past week and at least 2,500 migrants remain in the small Central American country, overwhelming the government’s limited response capacity and leaving migrants highly vulnerable.

The migrants, who continue to arrive at the rate of 100 to 150 a day, are mostly Haitian, many claiming to be from Africa. Nonetheless, there are people from African and Asian countries – including the Congo, Senegal, Ghana, Côte d’Ivoire, Togo, Nepal, Bangladesh, Somalia, Afghanistan and Iraq.

While Costa Rica has for years seen small flows of irregular “extra-continental” migrants bound for the US from these same countries, their number spiked in November when Nicaragua tightened its migration controls to promote safe and orderly migration.

Moreover, economic downturns in Brazil and Ecuador also have added to the flow of these migrants northwards. Many arrive in Costa Rica having crossed Colombia and survived the dangerous jungle of the Darien Gap, between Colombia and Panama, which claims many lives.

The Costa Rican government has now opened four centers to provide basic assistance to the migrants in the form of food, shelter and medical assistance. But these are filled to capacity and at least 1,500 migrants are living in dire conditions in an improvised camp less than a kilometer from the border crossing with Nicaragua.

Many migrants use the services of “coyotes” – people smugglers – who charge up to USD 1,000 per person, promising to take them through Nicaragua to Honduras. Often these “coyotes” instead abandon the migrants in the jungle or hand them over to robbers. Last week the remains of ten “Africans” (at least half now are thought to have been Haitian) were discovered near the Costa Rica-Nicaragua border. At least two more have returned to Costa Rica with serious gunshot wounds inflicted by smugglers.

Many migrants have been cheated more than once and return to Costa Rica for food, shelter and a money transfer from family or friends. Some are not so lucky.

IOM staff visited the border camp to inform the stranded migrants about their options for regular and safe migration. These include the possibility of a free return to any country where they have citizenship or the right to work. IOM also informs them that anyone with a well-founded fear of persecution has the option of seeking asylum and requesting refugee status.

“Costa Rica has been very generous but is now overwhelmed. Many of the migrants stranded here have sold everything they had to pay for what they hoped would be a journey to a better life. Many have also been traumatized by the abuses that they have suffered. Now many just want to go home, but simply don’t have the resources,” said IOM Costa Rica Chief of Mission Roeland de Wilde.