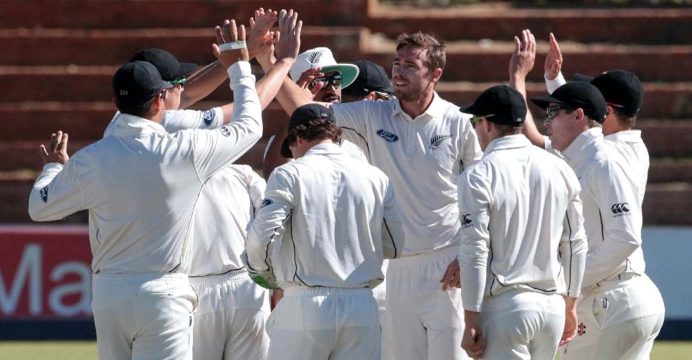 Craig Ervine closed in on a dogged half-century on Monday as Zimbabwe did their best to hold off New Zealand’s bowlers on the third day of the second Test.

Ervine went to tea on 48 and had debutant Peter Moor for company, as Zimbabwe reached 185 for five after 87 overs at the crease.

New Zealand knew that they faced a long battle to take 20 Zimbabwean wickets when they declared on 582 for four at tea on day two, with the Queens Sports Club pitch offering no assistance to the bowlers.

Zimbabwe proved as much by not losing a wicket on the second evening, but New Zealand chipped away at them over the first two sessions on Monday.

Opener Tino Mawoyo played on from the bowling of Tim Southee early in the day to depart for 26, and a poor stroke from Sikandar Raza Butt after the morning drinks break saw him edge to slip off Neil Wagner.

Chamu Chibhabha continued to anchor the Zimbabwe knock in a 170-ball innings, but his dismissal for 60 at the end of the first session left the hosts’ middle order exposed.

Left-arm spinner Mitchell Santner made the breakthrough, inducing a drive from Chibhabha that was well caught by Kane Williamson at short cover.

Legspinner Ish Sodhi contributed with the wicket of Sean Williams in the afternoon session when he trapped the left-hander lbw for 16, but Ervine was unmoved having been dropped at slip off the bowling of Southee when he had scored just one.

Moor endured a nervous start in his first Test innings and also had to contend with the second new ball, but gradually came into his own to reach tea on 25 not out.