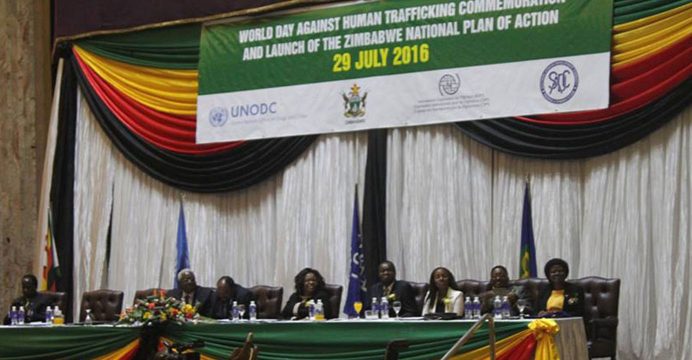 Officially launched by Zimbabwe Vice President Emmerson Mnangagwa, the plan was developed with technical support from IOM, UNODC and the SADC Secretariat. The launch in Harare was on the eve of the World Day against Trafficking in Persons on 30 July.

The government, through the Anti-Trafficking Inter-Ministerial Committee, developed the TiP NAPLAC as the country’s roadmap for the implementation of its obligations under the UN Protocol to Prevent, Suppress and Punish Trafficking in Persons.

The plan is underpinned by the 4Ps – Prevention, Protection, Prosecution and Partnership – and will be implemented over two years from 2016 to 2018. Among the actions it prioritizes is strengthening tools for the identification of victims of trafficking, which is the baseline for measuring an effective response.

Vice President Mnangagwa noted that Zimbabwe is a source and transit country for human trafficking. “The launch of the TiP NAPLAC demonstrates the government’s commitment to fight human trafficking and to protect its citizens, especially children and women who are most at risk of trafficking,” he said.

The launch of the plan comes at a time Zimbabwe is in a trafficking “storm”. Over 140 trafficked Zimbabwean women have been recently repatriated from Kuwait and many more are reported to be still held there. The government and partners, including IOM, are providing protection and reintegration assistance to the victims.

At the launch, UNODC Regional Legal Advisor Samantha Munodawafa called on people to be conscious that trafficking does not only occur across borders but also happens inside a country. “The under-age forced marriages, the young and old women that we bring from rural areas and exploit and abuse in domestic servitude, after promising a good salary or education opportunities on recruitment, are all internal forms of trafficking,” she said.

“I would like to reiterate IOM’s commitment to continue working with the Government of Zimbabwe both on migration governance issues in general, and on the operationalization of the TiP National Plan of Action in particular,” said IOM Zimbabwe Chief of Mission Lily Sanya.

United States Ambassador to Zimbabwe Harry K. Thomas, Jr. said: “Our position is to collaborate and to energise and most importantly to empower people. We look forward to working with the Government of Zimbabwe to address together, our common enemy – trafficking in persons.”