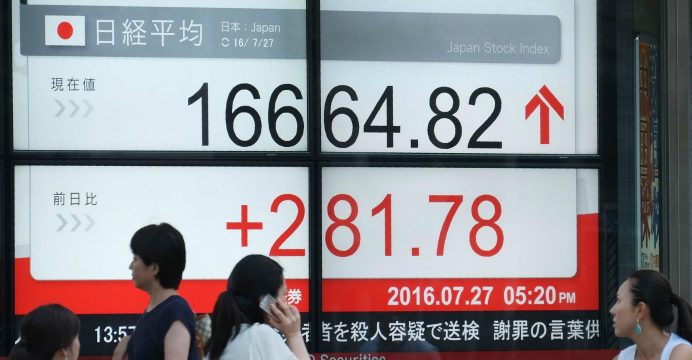 In the US, the broad-based S&P 500 and the tech-rich Nasdaq ended at all-time highs on Friday after Washington reported a big gain in jobs in July and upgraded employment estimates for the prior two months.

The world’s top economy added 255,000 jobs in July, the US Labor Department said, easily topping analyst forecasts for an increase of 185,000.

The strong report boosted the odds of a US interest rate hike by the end of the year, analysts said, lifting the dollar at the expensive of the Japanese yen and other major currencies.

The greenback rose to 101.99 yen from 101.79 yen in New York and 101.08 yen in Tokyo earlier on Friday. A weaker yen is a plus for the overseas profitability of exporters, boosting share-buying in those firms.

“A possible pullback in US jobs figures had kept some on guard, and the latest data have quenched those concerns,” Hitoshi Asaoka, a senior strategist at Mizuho Trust & Banking, told Bloomberg News.

“It does leave room for a rate increase within this year, but that will be offset by the impact on the yen, which will in turn support Japanese stocks.”