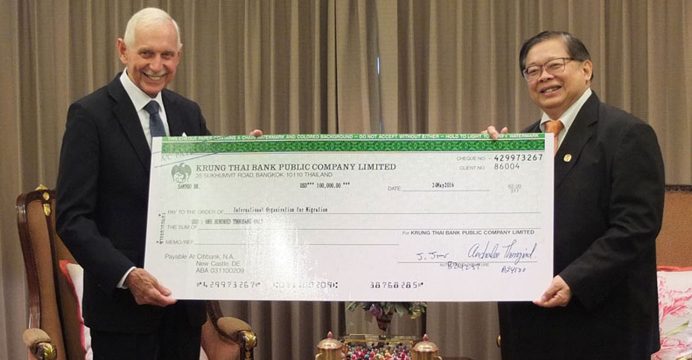 “Start smart, end with success” is the message of an information campaign that IOM has launched with Thailand’s Ministry of Foreign Affairs as part of efforts to address irregular migration in the region, particularly in the Bay of Bengal.

The Royal Thai government has donated USD 100,000 to IOM to enable it to carry out awareness-raising activities on safe migration in five countries: Bangladesh, Indonesia, Malaysia, Myanmar and Thailand.

The cheque was presented to IOM Director General William Lacy Swing at an official ceremony in Bangkok on Thursday during a courtesy call to Thai Vice Minister of Foreign Affairs Virasakdi Futrakul.

Other issues discussed at the meeting included IOM’s working relationship with Thailand in the field of refugee resettlement, and its support for counter trafficking efforts between Thailand and neighbouring countries. This year marks 30 years since Thailand became an IOM member state.

At the meeting Ambassador Swing commended Thailand for its commitment in promoting safe migration and tackling human trafficking in the region.

“Irregular migration’s transnational nature requires a regional approach and a campaign that involves the cooperation of Bangladesh, Indonesia, Malaysia, Myanmar and Thailand in tackling the issue will contribute to an effective and sustainable solution,” he said.

The regional information campaign comes under the auspices of the 2nd Special Meeting on Irregular Migration in the Indian Ocean in December 2015, where the initiative was first announced by the Royal Thai Government.

It is part of wider regional counter trafficking efforts and provides an additional mechanism in facilitating a comprehensive and holistic approach in tackling the issue of irregular migration.

The project will involve a multimedia campaign and includes the creation of several information products, including an animation, a migration tips brochure, digital sharegraphics, infographics, a social media kit, and a website to engage beneficiaries and partners.

The products will be supplemented by grassroots activities, which will be designed in close consultation and coordination with IOM country missions and government counterparts, and implemented according to specific country needs and contexts.