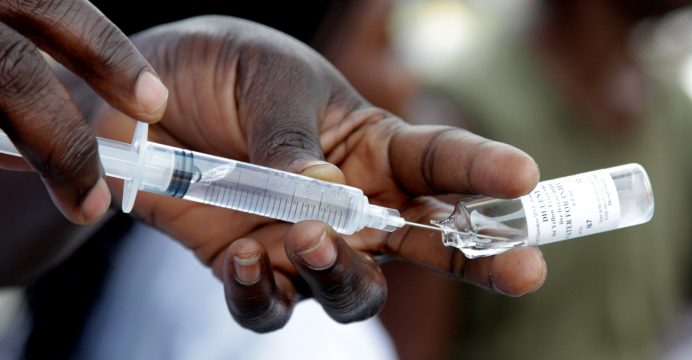 Gains in fight to control yellow fever outbreak: but response must continue

The yellow fever epidemic in Angola, first reported in late January 2016, appears to be declining, with no new cases confirmed in the last 6 weeks. However, WHO and partners continue to provide support to Angola as well as to Democratic Republic of the Congo to control the outbreak there.

More than 17 million additional people are expected to be vaccinated in massive campaigns scheduled to take place in both countries before the rainy season begins in this part of Africa in September.

The outbreaks of yellow fever in Angola and Democratic Republic of the Congo have posed special challenges for ministries of health, and responding partners, including WHO. This is the first time partners have had to manage such a large outbreak of yellow fever in a dense, urban setting.

As both Democratic Republic of the Congo and Angola are endemic for yellow fever, sporadic cases have simultaneously occurred in remote, rural areas, adding to the existing logistical challenges. This includes ensuring that people in hard-to-reach areas have access to vaccination as well as creating infrastructure to keep vaccines at the right temperature until they are administered.

More than 42 countries in the world are endemic for yellow fever and regularly experience outbreaks. However, transmission in 2016 has been explosive and rapidly exhausted the usual global emergency stockpile of 6 million vaccine doses managed by the International Coordinating Group (ICG) on Vaccine Provision (WHO, UNICEF, MSF and IFRC). This rise in yellow fever cases is probably due to the unusual severity of El Niño, which has led to a higher than usual density of the mosquitoes that transmit the disease.

However, the collaboration of partners including Gavi the Vaccine Alliance, the ICG partnership, and manufacturers, has enabled countries affected by the current outbreak to access almost 19 million doses of the yellow fever vaccine since January. This is 3 times the volume normally planned for outbreak use in a 12 month period.

Use of the global supplies of yellow fever vaccine has been carefully monitored and reviewed. Even with the upcoming campaigns in Angola and Democratic Republic of the Congo there are an estimated 5 million doses of the vaccine left in the emergency stockpile, an amount which will increase progressively as more vaccine is produced.

Partner coordination has ensured that the response to the outbreak has been timely, with the first shipment of vaccines to Angola arriving within 5 days of the country making a request to the ICG. In addition, partners have ensured the in-country delivery and coordination of multiple supplies and equipment to assemble the requisite elements for mass campaigns. To date, more than 16 million people have been vaccinated in Democratic Republic of the Congo and Angola.

To ensure the rapid protection of the population of Kinshasa, a dose sparing strategy will be used during the planned vaccination campaigns. This strategy is based on the recommendations of scientific experts brought together by WHO.

One fifth of a regular dose of the yellow fever vaccine will be administered as an emergency measure to the 8.5 million people in Kinshasa who still need vaccination against the disease. Studies show that this ‘emergency’ dose will safely provide effective immunity against yellow fever for at least 12 months and possibly for much longer.

In addition to ensuring access to vaccines and supporting vaccination campaigns, WHO and partners are also supporting affected countries by: