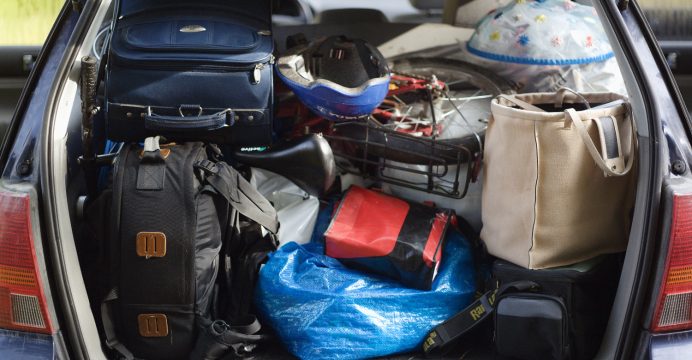 Cautionary tales of packing fails – and how to avoid them

If you’ve ever opened your suitcase to find a shampoo bottle has burst, or cringed as airport security had to rifle through your dirty pants and socks, then you’ll know luggage problems are a rite of passage for travellers – we’ve all been there, done that, and lost the t-shirt.

I give my suitcase OCD-levels of attention when packing to go on a trip, but returning home my relaxed, post-holiday self always seems to say, ‘forgeddaboutit’. Unfortunately, on my way back from Ibiza last year, this resulted in a bottle of sunblock cracking and leaking over everything else. Apparently, sunblock stains white and light-coloured fabric really badly (who knew?) and I had to throw away several items of clothing that couldn’t be salvaged even by washing them several times.

Top tip: Place your bottles in ziplock bags and try to pack them between soft items like towels so any knocks your bag receives on the luggage carousel are cushioned.

FALLING APART AT THE SEAMS

As a fresh-faced graduate, saving every penny for my imminent round-the-world trip, I decided to opt for the cheapest backpack I could find in my local retail outlet. It was purple, which was the main selling point for me. What I should have examined, however, were the practical features – including the quality of the lining, which proceeded to rip within the first week of my four-month journey. Sitting on the floor of San Francisco’s bus terminal stitching my bag back together wasn’t quite how I’d envisaged my time in California.
Top tip: Invest in a decent backpack for long-term travels. Do your research and try on a few different styles to see which one works for you – and always pack a needle and thread.

On our first long road trip, my partner and I decided to pack everything in one big case as we had only hired a little car. This was a nightmare. Not only did it mean we had to sift through each other’s clothes to get to a pair of socks, but towards the end of the holiday our suitcase was just a pile of mixed-up, unfolded clothing, and we had to keep unpacking and repacking every time we needed to get anything.

Top tip: When road-tripping as a couple, take a small case each and pack clothes according to outfits for each day.

I thought it would be great to take some rather unique Newfoundland beer back to Vancouver after a Lonely Planet research trip. I packed the six bottles of beer carefully in a rubber dry-bag (from my kayak) and bundled my clothing around each of them to ensure that the odd knock wouldn’t shatter them. But when the bag eventually arrived in British Columbia a week later (another story!), the bottles had all survived – caps still sealed – but the beer had not. The changes in pressure during the flight had lifted the caps off enough for the beer to escape, and when the plane descended the caps resealed themselves.

Top tip: Beers bottles with caps (twist off or not) don’t take well to flying. Wine/booze bottles with screw tops and corks seem to pass the test.

Many years ago a friend and I followed Alfred Wainright’s classic coast-to-coast walk across the UK from St Bees in Cumbria to Robin Hood’s Bay in Yorkshire. We completed this 192-mile route, which cuts through three national parks (the Lake District, the Yorkshire Dales and the North York Moors) in seven brutal days. And we did it all carrying bulging, back-breaking rucksacks. Years later, I repeated my mistake, packing way too much gear for a similarly spectacular tramp along Tasmania’s Overland Track. Never again.

Top tip: Assemble everything you want to take. Now put half of it away again. Then pack your bag.