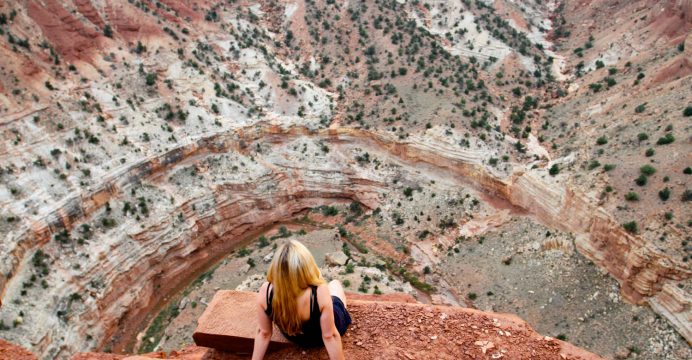 Best hikes of the Southwest’s rock star: On the trail in Utah

These expeditions into Utah’s wild and ragged backcountry give the best outdoor experience the state has to offer.
Hiking among hoodoos in Bryce Canyon

Bryce Canyon National Park is once seen, never forgotten – particularly at sunset when its battalions of peach-pink hoodoos blush deeply in the last fiery light of day. Rising like the ruins of a fantasy fortress, these rocks are something else. As the sky reddens, the pinnacles, fins, spires and pillars – some as delicate looking as drip sandcastles or wax candles – are thrown into relief, as creeping shadows silhouette their contours.
Founded in 1928 and named after 19th-century Mormon pioneer Ebenezer Bryce, the national park is actually a collection of natural amphitheaters that sits astride the Paunsaugunt Plateau, whose origins reach back 20 million years. Over eons, the soft Claron Formation limestone has been dramatically eroded by freeze-thaw action and rainwater that has fallen into the chimney-like spires or ‘hoodoos’ that are the park’s hallmark.
It might be in the desert, but Bryce is no arid wasteland. Lifted on a highland plateau, the park bristles with spruce, juniper and Ponderosa pine forests that offer a cool respite even in the height of summer. Peregrine falcons and California condors wheel overhead in cloudless skies, while rattlesnakes, lizards, golden-mantled ground squirrels and elusive mountain lions slither and scamper at ground level.

You can get a taste of what’s out there by car, but nothing beats heading out on foot. Providing grandstand views of the canyon from above, the reasonably gentle, 5.5-mile Rim Trail is instantly spectacular, linking lookouts like Fairyland to Bryce Point. For fewer crowds, walk the lesser-known, 5.5-mile Peek-A-Boo Loop. This more challenging half-day trail wriggles deep into the Bryce Amphitheatre, with astonishing close-ups of hoodoos and pastel-hued cliffs honeycombed with caves, windows and arches. For true solitude-seekers, the backcountry on the 22.9-mile Under-the-Rim Trail beckons.

Scenic Byway 12 links Bryce Canyon to Capitol Reef National Park, 124 stop-the-car-and-grab-the-camera miles northeast. Billed as one of the most sensational drives in the States, this highway dips into the bear-sprinkled wilds of the Dixie National Forest, rolls on through Escalante’s moonscape of slickrock, traverses ridgebacks and contours the slopes of 11,316ft Boulder Mountain before arriving at Torrey – the gateway to this eye-poppingly colorful national park.
Out on its lonesome in south-central Utah’s red rock country, Capitol Reef is remote enough to remain peaceful even during peak season. Hit the trail here and you’ll encounter corners of the park so silent that the only sound is your own footsteps echoing off canyon walls – or perhaps the rustle of a desert bighorn sheep in the juniper bushes.

The park is a geologist’s dream, centering as it does on the Waterpocket Fold, a near-100-mile wrinkle on the earth formed by the same forces that lifted the Colorado Plateau 65 million years ago. This gave rise to Capitol Reef’s rocky spine of canyons, bridges, domes and cliffs, suffused with ever-changing shades of pink, ochre, red, taupe and grey. But not only nature has left its mark here – petroglyphs scratched into the rock faces are a nod to the prehistoric Fremont culture that thrived around 2000 years ago, while the apple, cherry, apricot and pear orchards in Fruita (feel free to sample the fruit in season) point to the Mormon pioneers who settled here in the 1880s, reports lonely planet.
Aside from the odd fellow hiker, you’ll have park trails pretty much to yourself, such as the 2.2-mile Grand Wash, a cave-pocked gorge that slices its way through the upper end of the Waterpocket Fold. For more drama, tag on a steep 1.7-mile detour up an exposed ridge to the Cassidy Arch, which leaps across a 400ft-high void and looks out across over slickrock, domed peaks and coral-reef-like strata. Nearby, off Hwy 24, a short, unpaved road leads to the Gooseneck Overlook, with giddying views over serpentine Sulphur Creek. Linger until the setting sun dips below the horizon.

Above and beyond: Zion

Way up there on the list of America’s greatest national parks, Zion National Park in southwest Utah is outstanding hiking country, with trails delving into narrow slot canyons, up to slickrock peaks and past Navajo sandstone cliffs rippled red, gold and cream. This spectacularly buckled and contorted landscape has been shaped over millennia by the Virgin River that flows through Zion to the desert below. Zion began life as a massive desert some 250 million years ago, with winds dragging one dune on top of another to create the impressive rock strata visible today.
Utah’s first national park founded in 1919, Zion stays true to its original conservation ethos, with free shuttle buses whisking visitors between trailheads, keeping the park largely traffic-free. Viewpoints are abundant – as are scenic drives – but nothing gives you such a true sense of this 229-sq-mile park as taking to its trails, which swing from easy strolls to tough, multi-day treks. Most visitors barely touch the surface – the true treasures here are hidden in the vast backcountry.

If you’ve secured a permit ahead and are up for a challenge, you’ll be blown away by The Subway, a slot canyon gouged through the rock face, which can be hiked bottom-up or top-down. Either way, it’s a semi-technical, 9-mile round-trip hike involving boulder scrambling, creek crossing, cold-water swims and rappelling. An equally staggering – and strenuous – half-day hike leads up to Angel’s Landing, a 1488ft fist of rock. The stiff ascent takes you through the blissfully cool Refrigerator Canyon and up 27 switchbacks known as Walter’s Wiggles before the view cracks open. The end of the trek is insane, with a vertigo-inducing, cable-secured track threading precariously up to the summit for top-of-the-beanstalk views of the Zion Canyon and the Big Bend in the river far below.
If the summer heat is too intense, a refreshing alternative is The Narrows, an eight-hour, 9.5-mile round-trip hike through a rugged gorge. It’s worth kitting yourself out in waterproof gear from Zion Outfitter (zionoutfitter.com) as the hike involves upstream wades in the Virgin River, which polishes boulders smooth as it flows past cliffs towering up to 1000ft in height. In the narrowest reaches of the canyon, the rock faces are barely an arm’s width apart.