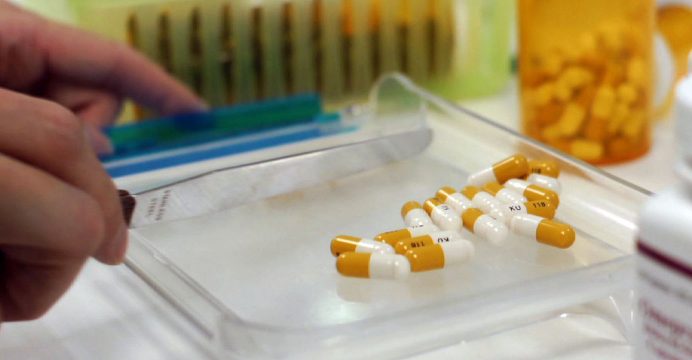 Generic forms of a biologic drug used to treat rheumatoid arthritis, inflammatory bowel disease and psoriasis appear to be as safe and effective as their brand-name counterparts, a new Johns Hopkins Bloomberg School of Public Health analysis suggests.

Biologics, or medical products made from living cells, are the fastest-growing sector of the pharmaceutical market. These drugs are complicated to manufacture and companies have argued that generic forms – while they would be cheaper for consumers and the health care system – cannot be considered interchangeable with established drugs that have been on the market for years. The new findings, published Aug. 2 in the Annals of Internal Medicine, come at a time when many of these biologics are coming off patent, and generic versions – known as biosimilars – could save a lot of money.

“The billion-dollar question has been whether these ‘generic biologics’ are the same as the brand-name versions,” says study leader G. Caleb Alexander, MD, an associate professor in the Department of Epidemiology at the Bloomberg School and co-director of the Johns Hopkins Center for Drug Safety and Effectiveness. “The same debate occurred with the advent of less complicated generic drugs and now it’s being hashed out all over again with much more at stake – more room for error and more potential for cost savings to the health system. But based on the available evidence, we conclude that the products we studied appear comparable, and they will definitely be cheaper.”

By 2017, sales for biologics are expected to represent approximately 20 percent of the total pharmaceutical market and wide adoption of biosimilars could eventually save the health system billions of dollars.

For their study, the researchers chose to analyze the scientific literature to compare original and biosimilar forms of a treatment for rheumatoid arthritis, inflammatory bowel disease and psoriasis, known as tumor necrosis factor-alpha (TNF-α) inhibitors. This class of drugs suppresses the activity of TNF, a substance in the body that can cause inflammation and lead to immune-system diseases that affect multiple organ systems and that are a major cause of disease and disability in the United States and around the world.

They took the data from 19 studies conducted through April 2016 and found that, while there weren’t a large number of studies, the available data suggests that biosimilar drugs have very similar safety and effectiveness as their branded counterparts.

The pharmacologic activity of biologics is heavily dependent on the manufacturing process, wherein small changes in the production can alter the structure of the resulting medication. Due to the large, complex structures of biologics and the variability inherent in the manufacturing process, it is impossible to create a precise replica, or “generic version,” of a biologic, which is why they are called “biosimilars.” There can even be batch-to-batch variation in products manufactured in the same facility by the same methods.

Only one TNF-α inhibitor biosimilar has been approved in the United States. In April, the Food and Drug Administration approved Inflectra, a biosimilar for infliximab, which is sold as Remicade, for several indications including rheumatoid arthritis, inflammatory bowel disease and psoriasis. Other branded TNF-α inhibitors on the market include Humira, Cimzia, Enbrel and Simponi, while many biosimilar versions of these products have been approved in Canada, Asia and Europe.

“Our study should reassure clinicians and patients and, importantly, the folks who pay the bills – insurance companies and government programs like Medicare ­– that biosimilar TNF-α inhibitors appear comparable to their branded counterparts based on the evidence we have thus far,” Alexander says. “Hopefully, this will encourage the brisk adoption of these products. There is no question that greater competition in this market will benefit patients, prescribers and society in the long run.”

Many new cancer drugs are also biologics, as is insulin.

While this study only applies to TNF-α inhibitors, Alexander says it is an important and rigorous first look at a question that has been on the minds of many who worry about the future of a generic-type market for biologic drugs. He says more systematic research is needed on whether other biosimilar products, such as biosimilar insulins, work as well as their branded counterparts.

“Biologics are the wave of the future,” he says. “That’s where more and more of the pharmaceutical market is going in the years ahead.”

The research was supported by the Johns Hopkins Center of Excellence in Regulatory Science and Innovation (U01 FD004977-01).

Alexander is chair of the FDA’s Peripheral and Central Nervous System Advisory Committee; serves as a paid consultant to PainNavigator, a mobile startup to improve patients’ pain management; serves as a paid consultant to IMS Health; and serves on an IMS Health scientific advisory board. These arrangements have been reviewed and approved by the Johns Hopkins University in accordance with its conflict of interest policies. Kim has received funding from Pfizer, Lilly, AstraZeneca and Bristol-Myers Squibb through Brigham and Women’s Hospital. Segal and Chingcuanco have no conflicts of interest to report.