The statue of Christ the Redeemer overlooking Rio de Janeiro was illuminated in Brazil’s yellow and green national colors on Thursday as the city put the finishing touches to its preparations for South America’s first Olympics.

Workers rushed to install wiring and put up signs at venues as the Olympic flame made its way through the city of 6 million carried by a succession of sportsmen, stars and even a Nobel laureate, to cheers from thousands of residents who succumbed to the excitement of the Games.

It was a far cry from the previous evening, when riot police had used stun grenades and tear gas to clear protesters from the torch’s path in a poor suburb of Rio, fuelling complaints that the Games have ignored the city’s poor.

Those anti-torch demonstrations – the second in two days – underscored simmering social tensions in Latin America’s largest nation amid its worst economic downturn since the Great Depression and a political crisis that has deeply divided the country.

That resentment was nowhere to be seen on Thursday as the torch progressed through the well-heeled districts of Barra de Tijuca, where the Games will be held.

Brazil will open its Games on Friday in the famed Maracana soccer stadium with a ceremony showcasing samba and the drumming made famous by Rio’s Carnival celebrations – which will be watched by 50,000 in the arena and an estimated 3 billion around the world by television. 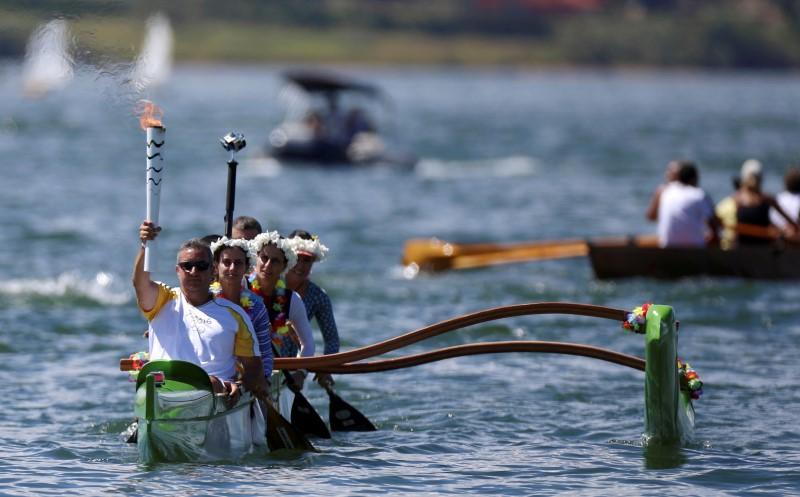 The torch rode the waves into Rio on Thursday in the hands of veteran Brazilian surfer Rico de Souza, a day after the International Olympic Committee (IOC) announced surfing – a major pastime in Brazil – would be one of five new sports included in the 2020 Olympics.

“It was incredible for us. We’ve been waiting for a long time for the Olympics and for surfing to be part of the Games,” said local surfer Milton Roberto, among hundreds of fans who cheered Souza as he did laps of Macumba beach after carrying the torch out of the ocean.

Some 500,000 foreign visitors are descending on the iconic beach city. They are protected by 85,000 police and soldiers, more than double the number of security personnel in the 2012 Games in London.

The brief abduction of three Swedish tourists by armed men on Wednesday after they stopped to take photos near a dangerous slum highlighted the security challenges facing organizers. The three were released unharmed, authorities said.

The opposition has called a demonstration against interim President Michel Temer’s government for Friday outside the Maracana stadium, accusing him of conducting a ‘coup’ against suspended leftist President Dilma Rousseff, who is being placed on trial in the Senate. 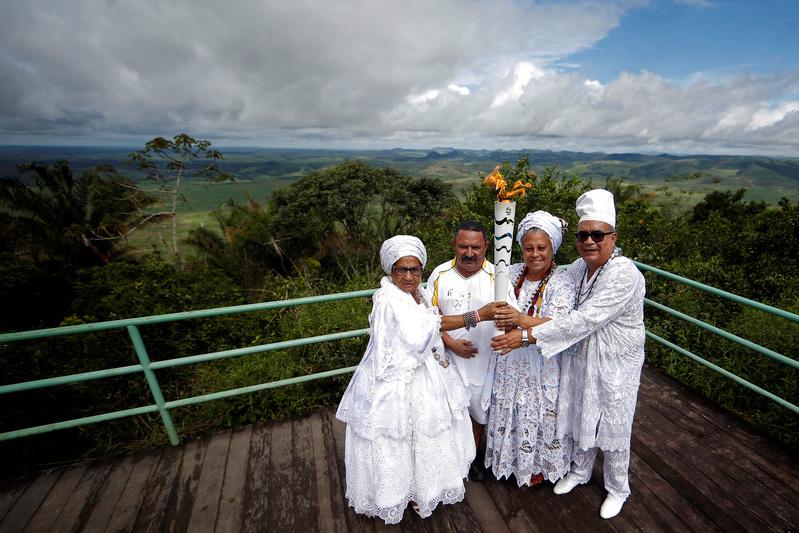 The tense political atmosphere may have deterred some foreign leaders from attending the Games, with Brazilian presidency sources saying only 28 heads of state have confirmed their presence – around half what was expected last week.

French President Francois Hollande, whose country is bidding for the 2024 Games, toured Rio de Janeiro’s Olympic Park on Thursday, met with members of his national swim team and posed for photos in front of the Olympic rings.

The volatile political situation has added to concerns over crime, water pollution, late infrastructure and an outbreak of the Zika virus in northern Brazil earlier this year that clouded the build-up to the Games.

The mayor’s office declared holidays on Thursday and Friday to ease persistent problems with traffic.

The Olympic soccer competition entered a second day on Thursday with Brazil eking out a disappointing 0-0 draw against South Africa in the national stadium in the capital Brasilia. Soccer is the only sport with games taking place outside the host city.

Fans of the national team watched the game in the rehabilitated Praça Mauá square by Rio’s port, home to a new museum and water-front promenade built for the Games. The area will house the Olympic pyre during the Games.