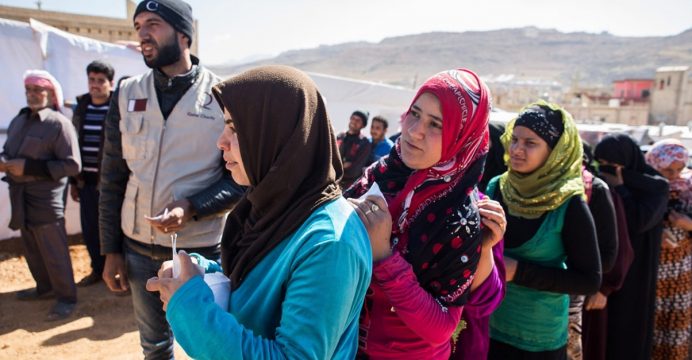 Spectre of hunger keeps Syrian refugee children out of school

With just 60 days to go before the start of the new school year, hundreds of thousands of Syrian parents are faced with the stark choice of whether to feed their children or send them to school, experts said on Wednesday.

Nearly 1 million Syrian refugee children are out of school in Lebanon, Turkey and Jordan which host the vast majority of the nearly 5 million refugees created by Syria’s civil war.

Many Syrian children are forced to work to help make ends meet, or unable to pay for transport to school, according to a report written by the head of the London-based think tank, Overseas Development Institute (ODI). In February, donors pledged $1.4 billion to help host countries provide education for all Syrian refugee children in Lebanon, Turkey and Jordan. About $1 billion of this has not yet been delivered, according to the report published on Wednesday, reports Reuters.

“If you’re a parent faced with a choice of giving your children a square meal at the end of the day, or paying for the transport … to send them to school … you’re likely to make a choice in favor of adequate nutrition,” Watkins said in an interview.

Poverty levels among Syrian refugees have increased sharply since the start of Syria’s civil war in 2011, as rental charges, rising food costs and spending on healthcare and heating have eaten into the savings of refugee families.

More than half of the 1 million Syrian refugees in Lebanon cannot afford enough food, and some 70 percent live on less than $115 per month, the country’s poverty line, ODI said.

Nearly 90,000 Syrian refugees in school in Lebanon may lose their places because of lack of funding, the report said.

Lebanon’s minister for education, Elias Bou Saab, urged donors to deliver on their February pledges, and to commit to funding education over several years.

“Only then can we make the decisions needed to keep children in school. Regional governments need more planning certainty,” he said in a statement on Wednesday.

“For our part, we will do everything we can to get every child into school. But we cannot do this alone,” he added.

Watkins said there is now an “epidemic” of refugee child labor in the region. He estimates that between 400,000 and 500,000 Syrian children are working in Turkey alone.

Turkey allows refugees to work and be paid a minimum wage. Even so, many of them are working informally for less pay, and there is some evidence that parents are marrying off their daughters young, the report said.

“I would love to go to school, I miss reading and writing. But if I go to school, nobody is going to bring food to my home,” the report quotes a 13-year-old refugee in Turkey as saying.

Sarah Brown, president of international children’s charity Theirworld which published the report, said the lack of access to education was widely cited by refugee parents as one of the main reasons for risking the hazardous journey to Europe.

“The vast loss of potential caused by the crisis in education threatens to deprive Syria of the skills it will need to rebuild a war-torn society,” said Brown, wife of U.N. envoy for education and former British prime minister Gordon Brown, in a statement.

Watkins said young teenagers with no hope of an education grow up at greater risk of being recruited by extremists.

“I would say not delivering on this pledge is about the highest mistake it’s possible for the international community to make at this stage,” he said.