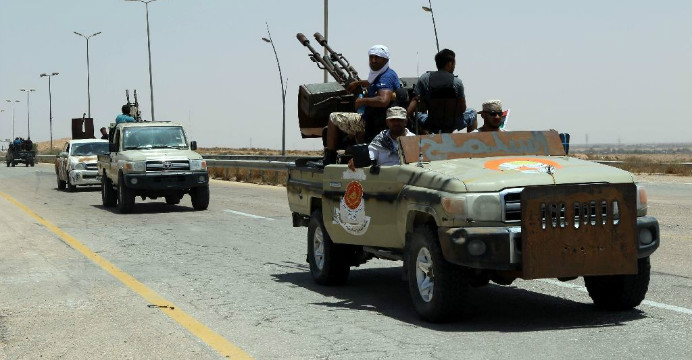 Libyan pro-government forces battled against IS in Sirte

Fighters allied to Libya’s UN-backed Government of National Accord (GNA), supported by US air strikes, are trying to retake the coastal city — hometown of slain dictator Moamer Kadhafi — from IS which has controlled it since June 2015. The loss of Sirte would be a major blow to the jihadist group, which has faced a series of setbacks in Syria and Iraq.

“Our forces… are trying to strengthen their advance with the support of ongoing American air strikes that have given momentum to the military operation,” said Reda Issa, a spokesman for forces loyal to Libya’s unity government. 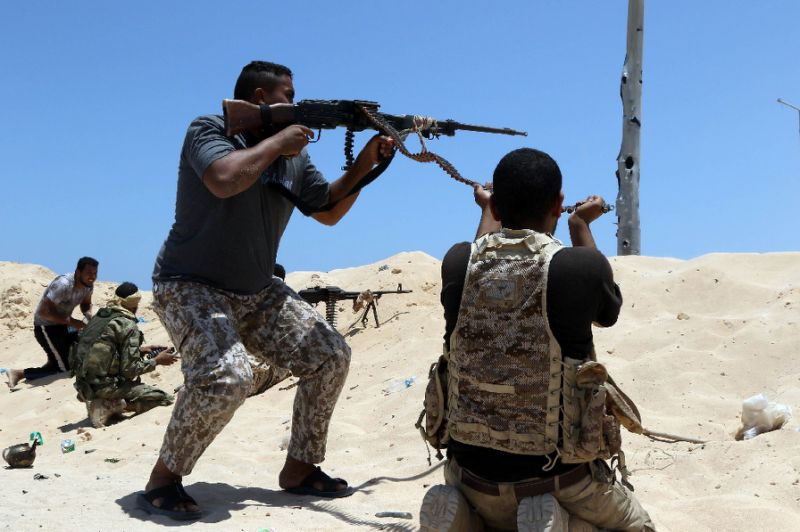 American warplanes carried out seven strikes against IS positions in Sirte on Monday and Tuesday at the GNA’s request, but Issa did not say whether further strikes took place on Wednesday.

GNA forces have been battling to oust jihadists — who seized control of the town in the chaos following the fall of Kadhafi — since May 12. They entered the city on June 9 and have so far retaken the city’s port, international airport, an air base and a hospital. But their advance slowed as IS hit back with sniper fire, car bombs and suicide attacks.

“There are targets that are hard to hit because they are among the houses,” said Issa.

“American air strikes, which are very accurate, will help to destroy those targets,” he added.

The country’s rival government based in the east condemned the US air strikes, slamming them as a political move by the GNA to sure up their hold on power.

A spokesman for forced linked to the Tobruk parliament Ahmed al-Mesmari slammed the US support as “political attempt by (GNA head Fayez) Serraj to achieve political gains”.

Two rival governments are competing for authority in Libya — the GNA, based in Tripoli, recognised by the international community, and the elected House of Representatives in the eastern city of Tobruk, which has refused to endorse the unity government.

On Tuesday the Tobruk parliament summoned the Tunis-based US ambassador to protest, saying it expected a written or verbal response if he could not attend in person.

Dar al-Ifta, the highest religious authority in the country, which does not recognise the GNA, also condemned the US air strikes against IS.

It said the raids showed “contempt for the many sacrifices of the martyrs” and were a violation of Libya’s sovereignty. The Tobruk administration faces its own fight with jihadists.

For two years, Libya’s second city Benghazi has been the scene of daily clashes between the forces of General Khalifa Haftar, who is aligned with the Tobruk-based authorities, and a militia alliance known as the Revolutionary Shura Council.

On Tuesday evening, 23 fighters allied with the House of Representatives were killed in a suicide attack in Benghazi, a medical source in the eastern city told reporters.

US President Barack Obama defended the air campaign on Tuesday, saying defeating the jihadists there was in America’s national interest. Obama has said that American air strikes serve the national security interests of the US and its European allies.

Washington has been carrying out air strikes against IS in Syria and Iraq since 2014, with the aim of “destroying” the group, which has carried out atrocities throughout the areas it controls.

Washington has launched several strikes against IS in Libya in recent months. In November US bombing in the eastern city of Derna killed a jihadist who Washington said was the most senior IS commander in Libya.

The fight for Sirte has taken its toll on GNA forces. More than 300 have been killed and 1,500 wounded, according to medical sources in Misrata, 200 kilometres (125 miles) east of Tripoli, where the GNA’s command centre is located. A spokesman for the GNA forces told reporters: “We asked for (US) support to limit our losses”.

“We have had more than 100 amputations, numerous clinical deaths and gravely wounded,” Mohamad Ghassri said.

The GNA decided to seek help from the US air force instead of buying intelligent weapons for its own warplanes because of the UN arms embargo on Libya since 2011, Ghassri said.

Italy’s defence minister Roberta Pinotti said Wednesday that Rome was “positively” considering a request from the US to use its airbases and airspace for strikes in Libya to boost the fight against IS.