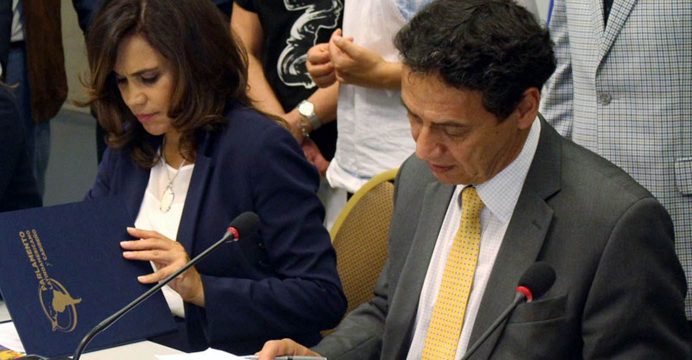 IOM and the Latin American and Caribbean Parliament have signed a cooperation agreement aimed at strengthening coordinated work on migration and development matters.

The Latin American Parliament (Parlatino) is a regional, permanent organization composed of 23 countries of Latin America and the Caribbean. It has a consultative assembly based in Panama, committed to promoting human rights and economic and social development, to maintain and foster relations with other parliaments, and to promote the self-determination of its member states.

The agreement compels both parts to share information in order to increase cooperation and common activities, to promote collaboration among migration-related institutions across the region, and to foster Latin-American integration through joint projects.

“Migration issues represent a challenge to our countries, which is why IOM and Parlatino have been working on this agreement in order to identify concrete responses to this challenge,” said Parlatino chair Senator Blanca Alcalá.

Marcelo Pisani, IOM Regional Director for Central, North America and the Caribbean, said: “This agreement is an opportunity for IOM to work closely with Parlatino on addressing the challenges posed by new migration flows in the region, and to facilitate the exchange of best practices developed by countries in the region on common interest issues such as trafficking in persons and migrant smuggling.”

According to the Economic Commission for Latin America and the Caribbean (ECLAC), an estimated 7.6 million immigrants live in the region. Of those, most were born in other countries in the same region.