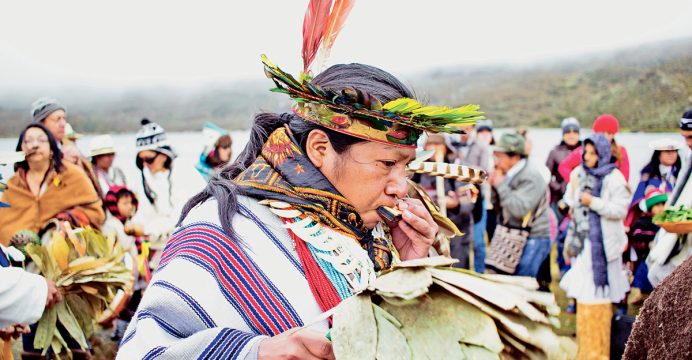 In the Andean city of El Alto indigenous Bolivians gathered at dawn to honor “Pachamama,” the goddess of the earth and fertility, on what is known locally as Mother Earth Day.

During the annual ceremony performed by indigenous Amautas, or senior Aymara doctors for the body and soul, the faithful offered sweets, alcohol and llama fetuses in tribute to the goddess.

Facing the majestic Illimani mountain, while holding up their hands, they carried out the ritual on Monday while standing next to a blazing bonfire, reports Reuters.

“We on August 1, make an offering to Pachamama, because on this day she is hungry and opens her mouth. When Pachamama’s mouth is open, we offer food,” said Cirilo Cruz, an Amauta.

“Offering tables are the reason why people come to this place that is very sacred, to give offerings to Pachamama.”

The ritual has been adapted by people across Bolivia. Many followers ask for material things such as houses, cars, holidays, health and money.

They gather at sites such the one in El Alto, where Amautas carry out ancient Andean rituals.

An indigenous Bolivian, Monica Canaza said she was asking Mother Earth for an additional car or truck.

“We must have faith. My close friend told me she acquired three vehicles in one year. I told her: ‘That’s great!’ I also told her that I have two vehicles,” said Canaza.

“In January, I will buy another baby. That is, another vehicle,” she explained.