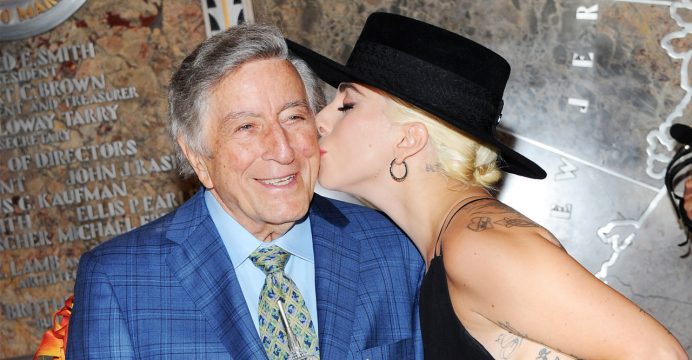 Tony Bennett celebrated his 90th birthday in New York style on Wednesday, as he was joined by Lady Gaga at the Empire State Building at a ceremony that will light up the iconic building in the colors of red, white, and green to commemorate the veteran singer’s Italian roots.

Bennett and Lady Gaga posed for photos before flipping a switch to light up a replica of the building. Bennett then ventured to the Empire State’s observation deck for a sky-high view over Manhattan.

With more than 60 years in the spotlight, Bennett has accomplished numerous milestones including winning 19 Grammy awards, but he’s not quite done yet, reports Reuters.

“There’s plenty, but I tell you, this is a day I’ll never forget as long as I live. To be treated this way at 90-year old, I feel life I’m 19-years old. It’s a wonderful treat and it’s one of the very special days in my whole life,” Bennett said.

Bennett was born Anthony Dominick Benedetto in 1926 in the Astoria section of Queens, New York City. His career took off in the 1950s, when he recorded hits like  “Rags to Riches,” and “Blue Velvet.”  His signature song, “I Left My Heart in San Francisco,” was released in 1962. He’s also sung duets with some of the industry’s biggest singers, including Bono, Amy Winehouse, and Lady Gaga – with whom he released a full album of music, “Cheek to Cheek” in 2014.