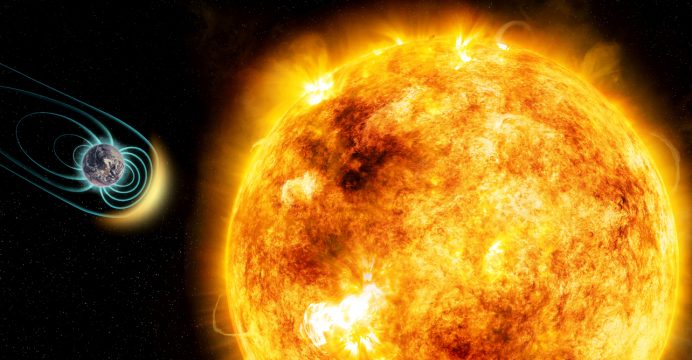 Research by an international team including astronomers at the International Centre of Radio Astronomy Research (ICRAR) observing the region at the lowest-ever radio frequencies has helped fine-tune our understanding of stellar explosions.

The research paints a picture of the star’s life long before its death in what was the closest and brightest supernova seen from Earth, now known as supernova remnant 1987A, which collapsed spectacularly almost 30 years ago.

Much had been known about the immediate past of this star through studying the cosmic ruins resulting from the star’s collapse in 1987, which occurred in neighbouring galaxy, the Large Magellanic Cloud. However it was the detection of the very faintest of hisses through low-frequency radio astronomy that has provided the latest insights. Previously, only the final fraction of the dead star’s multi-million-year-long life, about 0.1% or 20,000 years, had been observable, reports Science Daily.

This latest research — which has enabled astrophysicists to probe the supernova’s past life millions of years further back than was previously possible — was led by Joseph Callingham, a PhD candidate with the University of Sydney and the ARC Centre of Excellence for All-Sky Astrophysics (CAASTRO).

The findings are published today in the Monthly Notices of the Royal Astronomical Society, Oxford University Press.

“Just like excavating and studying ancient ruins that teach us about the life of a past civilisation, my colleagues and I have used low-frequency radio observations as a window into the star’s life,” Mr Callingham said.

The star’s secret past and deadly explosion are depicted in a video compiled by CAASTRO.

The team of researchers found the red supergiant lost its matter at a slower rate and generated slower winds that pushed into its surrounding environment than was previously assumed.

“Our new data improves our knowledge of the composition of space in the region of supernova 1987A; we can now go back to our simulations and tweak them, to better reconstruct the physics of supernovae,” Mr Callingham said.

Professor Lister Staveley-Smith, co-author of this study and Deputy Director of CAASTRO and ICRAR, explained that the Murchison Radio-astronomy Observatory is one of the most radio quiet places on the planet and has enabled these sensitive observations to be made.

“Low-frequency radio waves are very sensitive to the presence of intervening plasma, so tell us a great deal about the density of matter immediately in front of the supernova remnant. Their presence also tells us about the in-situ acceleration of very high-energy particles called cosmic rays, many of which are believed to be created in young remnants such as this.” Professor Staveley-Smith said.