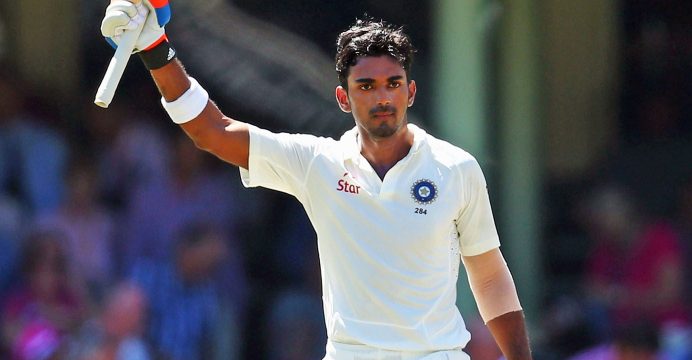 Lokesh Rahul’s Test-best 158 anchored India’s formidable reply to the West Indies first innings total of 196 as the hosts reached 358 for five at stumps on the second day of the second Test at Sabina Park in Jamaica on Sunday, reports BSS.

Leading 1-0 in the four-match series, the tourists enjoy a lead of 162 runs with five wickets in hand.

Making the most of a recall to the team as replacement for the injured Murali Vijay, Rahul interspersed moments of rare aggression with long periods of watchful defiance over his near seven-hour occupation of the crease in compiling his third hundred in just six Tests.

Resuming on the second morning on 75 in partnership with Cheteshwar Pujara, he hoisted part-time off spinner Roston Chase for the first six of the innings over long-on to reach three figures after 90 minutes’ play. There were two more sixes in the mid-afternoon session to embellish an innings that spanned 303 deliveries and also included 15 fours.

“It was hard to get runs today and it was also really, really hot,” said Rahul reflecting on his first Test innings in a year. “I was really enjoying my batting even though they were bowling a lot better today.”

He put on 121 for the second wicket with Pujara, who was run out for 46 after lunch by Chase’s direct throw to the stumps at the non-striker’s end. That was the only success for a limited West Indies attack through the first two sessions of the day as they struggled to offer any consistent threat to batsmen well equipped technically and temperamentally for the requirements of the day, especially after India had taken such a firm grip on the match by the end of day one.

Virat Kohli, in top form following a career-best 200 in the first Test triumph in Antigua a week earlier, seemed in the mood to deepen the home side’s dilemma. He helped Rahul add 69 runs for the third wicket going into the final session of the day when the opener’s innings ended in somewhat controversial circumstances as lengthy deliberation involving the television umpire was needed before he was ruled caught by wicketkeeper Shane Dowrich down the leg-side off fast bowler Shannon Gabriel.

Chase snared his second wicket, the prized scalp of Kohli, when the Indian captain fell to a sharp catch by Rajendra Chandrika at short-leg for 44 and leg-spinner Devendra Bishoo earned an LBW verdict against Ravichandran Ashwin. At that stage, India had lost three wickets for 50 runs at 327 for five, a veritable collapse in the context of their virtual impregnability through the first six hours of the innings.

“I’m a batsman more than a bowler but I’m looking at developing my all-round game,” said Chase at the end of the day when he again featured prominently with his off-spin. “The selectors spoke to me about it and advised that I shouldn’t be a one-track player so I’m working on my bowling especially.”

Notwithstanding the mid-innings wobble, India remain firmly in control with Ajinkya Rahane and wicketkeeper-batsman Wriddhiman Saha unbeaten at the close and together with the rest of the batting will be seeking to play the West Indies completely out of the match on the third day.