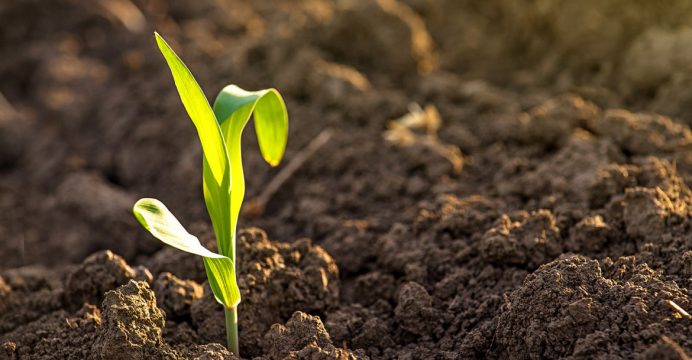 Across the globe, soils are under threat. Due changing land use to feed a growing population, climate change, and contamination of land with toxic chemicals, this precious resource is deteriorating, posing a serious threat to our future food security.

Plant roots play a key part in keeping soil together, making it resistant to erosion and helping water flow through the soil, which can help to prevent floods. But until now little was understood about how the roots under different plant communities affect the physical condition of the soil.

In a series of experiments in field sites in the UK and Germany, scientists tested the soil’s structural stability when planted with a variety of different grasses, herbs and legumes. They found that soil structure improved with higher plant diversity and that the diverse properties of different plant roots were the key factor in keeping soil healthy.

Plant roots excel at different things — for example legumes are better at getting water into the soil more quickly and maintaining root-soil strength. Grasses, however, have fine rooting systems that enhance the stability of soil making it more resistant to erosion.

Combine their effects and the benefits to the soil are enhanced. This was found to be the case in both a plant manipulation experiment conducted at the Lancaster University Field Station, and at a large scale plot experiment in Jena, Germany.

Lead author Dr Iain Gould of the Lancaster University Environment Centre, said: “We only need to look at historical examples such the American Dust Bowl of the 1930s to see that globally, the physical degradation of our soil presents a serious threat to human well-being. This study offers clear evidence that by increasing species richness we can not only increase ecological value, but also provide a degree of protection to our soil which is good news for the future.”

Professor John Quinton, Lancaster University Environment Centre, said: “Improving the physical structure of soil is vital for conserving water, reducing flooding and water pollution. Our findings demonstrate that increasing plant biodiversity improves the physical properties of soil and have the potential to help us develop new, greener solutions for these issues.”

Professor Richard Bardgett of The University of Manchester said: “Soils are severely degraded in many parts of the world and these findings suggest that enhancing plant diversity could be an important way of speeding up their restoration to bring back fertility. It is almost like different combinations of roots can be used to engineer the soil, working to enhance its physical structure which is key to soil health.”