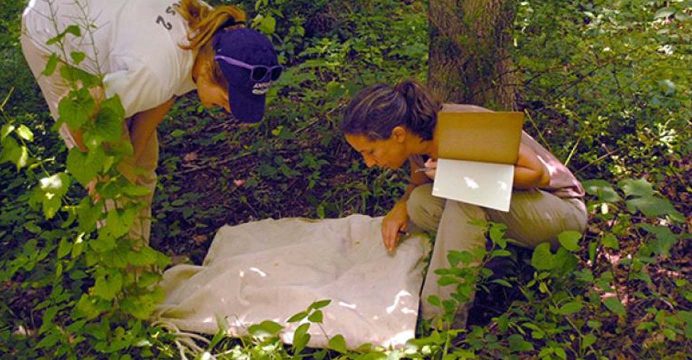 As spring blooms, people in the Northeast and Midwest look forward to spending more time outdoors—which also means plotting ways to avoid the disease carrying black-legged deer tick. This year new research shows that people outside of these areas may also want to take precautions. Black-legged ticks are rapidly growing in number, expanding geographically and carrying pathogens that can lead to ailments like Lyme disease and babesiosis into places where they were relatively unknown.

Disease ecologist Maria Diuk-Wasser’s lab is tracking the spread and emergence of tick-borne pathogens, including a malaria-like parasite called Babesia microti, which causes babesiosis when transmitted to humans. An increasing number of ticks are infected with babesia and Diuk-Wasser’s team is exploring evidence that the trend is connected to the rapid spread of Borrelia burgdorferi, the bacterium that causes Lyme disease.

“We found that these two pathogens co-occur in ticks more frequently than expected, resulting in enhanced human exposure to multiple infections,” says Diuk-Wasser, associate professor in the Department of Ecology, Evolution and Environmental Biology. “Multiple infections lead to more severe symptoms and can make diagnosis more muddled and difficult.” About 1,000 new cases of babesiosis are reported each year, while Lyme disease infects about 30,000 people annually. The two diseases share some of the same symptoms, including a flu-like illness, but babesiosis, which can cause certain types of anemia, is potentially fatal in people with suppressed immune systems. It can also be transmitted through blood transfusions, posing an additional public health threat. If left untreated Lyme disease, which generally has a distinctive bull’s-eye shape at the site of the bite, may lead to problems in the brain and nervous system, muscles and joints, heart and circulation, digestion, reproductive system and skin.

Following lab experiments, fieldwork and the use of mathematical models, Diuk-Wasser’s team and researchers at the Yale School of Medicine, Tufts Medical Center and the Royal Melbourne Institute of Technology recently concluded a study suggesting a connection between borrelia and babesia. Published in the journal PLOS One, the study shows that mice infected with both pathogens are more likely to transmit babesia to ticks, which suggests an increased exposure to babesiosis for humans. So, as Lyme-disease causing borrelia invades new areas, babesiosis will likely follow.

“Understanding how these pathogens may influence each other’s distribution is important,” says Diuk-Wasser, who notes that when an infection emerges in new areas, “the diagnosis may be delayed because doctors and veterinarians don’t immediately recognize the symptoms.” That creates a serious public health concern.

Diuk-Wasser and her team are working to answer a number of questions, among them: What is causing the expansion of borrelia-carrying deer ticks in New England and beyond and how does infection with borrelia impact transmission of other pathogens?

“If we can understand transmission, we can estimate where different pathogens may start to appear and human infection may become something to watch out for. We might also eventually be able to devise control methods,” says Diuk-Wasser, who moved her lab to Columbia from Yale last September.

One working theory, she notes, is that climate change may be playing a role in the spread of Lyme and babesiosis in the northern U.S. and into Canada, because warmer temperatures speed up ticks’ development, which can result in larger tick populations.

To find out more about these parasites and the dangers they pose, Diuk-Wasser looks forward to forming partnerships with researchers who study pathogens, ecology and biodiversity in a variety of departments and schools across the University, including the Earth Institute and the Mailman School of Public Health, as well as affiliated institutions such as the American Museum of Natural History. She will be teaching a course in the fall on disease ecology.

“I’m an ecologist by training, so I’m excited to be at Columbia now,” she said. “It is a natural fit and perfect home for me. There are opportunities to collaborate with so many schools, centers, institutes and museums. This is a good place for me to be studying what I do.”