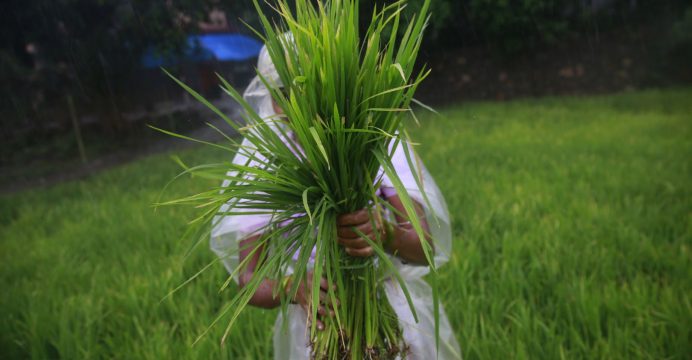 Rice, or Oryza sativa as its scientifically known, feeds more than a third of the globe. Yet the majority of rice crops that supply 90 percent of the world come from just two domesticated varieties, japonica and indica.

Despite its importance on global palates and economies, the domestication and origins of rice have remained a mystery. The popular consensus is that japonica, the shorter stickier grain perfect for sushi, has been exclusively cultivated exclusively in northern part of East Asia. In northern parts of East Asia, consisting of Japan, Korea, and northern part of China, current rice production and consumption are japonica with very little exceptional use of indica, reports Science Daily.

Now, using new data collected samples of ancient, carbonized rice, a team of Japanese and Chinese scientists have successfully determined DNA sequences to make the first comparisons between modern and ancient rice. To do so, they used new techniques to carefully cull chloroplast DNA from ancient rice 900-2,800-years-old, which had been excavated from seven archaeological sites in Japan and Korea.

In the process, they’ve become among the first research groups to successfully glean DNA information from ancient cereal crop analysis–not an easy feat. Literally, from a single grain of rice, less than 10mg in weight, they were able to glean DNA from typically just a few out of the precious hundreds they were able to sample. These ancient rice samples were compared to a database collected from 216 modern cultivated and wild rice DNA samples from around the world.

They have new findings suggesting that indica rice was historically cultivated in East Asia or imported to East Asia, which go against generally held assumptions. Almost 2,000 years ago, ancient East Asians lived on a wide variety of rice cultivars including indica. The research team has now found, for the first time, the presence of both japonica- and indica-type varieties in the Yayoi period and the middle ages of Japan and the middle part of Korea Peninsula 2000 years ago. Together with the finding of rice variety in Korean Peninsula, the indica variety also contributed to the dietary of people living in archaic East Asia of more than two thousand years ago.

The authors suggest the possibility of cultivation of the indica variety as the ordinary rice variety in the west side of middle of Korean Peninsula more than 2,000 years ago. Another possibility is that indica rice was brought from China, because the area around Lelang in that era was governed by Chinese Han Empire.

“We have shown a decrease in number of the rice cultivar in East Asia from 2,000 years ago to the present,” said the authors. “Reduction of genetic diversity by factitious bottleneck is one of the key aspects in domestication process. In addition, development of civilization and technologies has accelerated further reduction of genetic diversity in the modern era. Advanced agricultural technologies including water management, fertilizer and agrochemical enabled farmers cultivating rice fields under different environmental condition to produce varieties having higher value in market. Modernization has promoted sharing of the sense of values, causing homogenization of crop varieties produced.”

The study successfully demonstrates the ability of ancient DNA studies to provide new insights into archaic rice diversity and domestication, which otherwise have not been made from DNA evidence solely from modern rice.