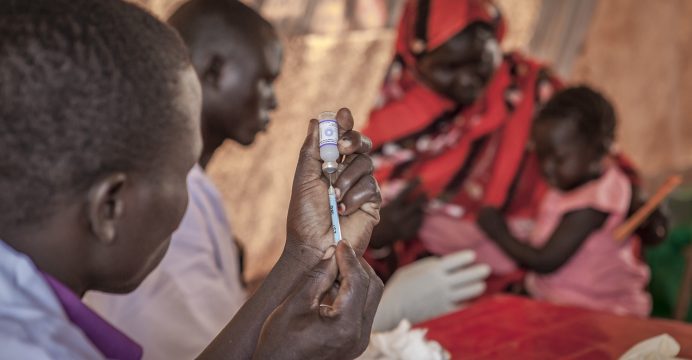 As the Nigerian army regains control of towns and villages in the conflict with Boko Haram, the extent of the emergency is becoming more apparent. Many people have been cut off from the outside world for as long as two years. Displaced people now living in towns controlled by the military are entirely dependent on outside aid—with many suffering from malnutrition as food is insufficient.

On June 21, an MSF team observed extremely high levels of malnutrition and mortality in Bama, Borno State’s second largest city. Bama is now a ghost town with just over 10,000 inhabitants living in a camp, and like many parts of Borno State, it is accessible only under army escort.

Nearly 1,500 people—the most vulnerable and sick—were then evacuated by the authorities and food aid increased. Yet MSF has still found that 15 percent of children in the camp suffer from severe acute malnutrition, and there have been about 40 deaths in the last three weeks.

There are almost no young men or teenage boys in the camp in Bama—an indication of the severity of the conflict that the community has endured.

An MSF team arrived in Bama yesterday to provide support with medical and nutritional treatment. Their objective is to rapidly reduce mortality and malnutrition among the displaced. The most critical cases will be transferred to Maiduguri. Improving access to water as well as hygiene conditions in the camp is equally urgent.

Yet Bama is only one of many communities in Borno State that are in dire need of aid. Monguno, a town of 150,000 inhabitants—65,000 of whom are displaced—has been without medical care since January 2015. MSF plans to relaunch activities at a hospital in Monguno and treat children with severe acute malnutrition.

“Everything suggests that the situation of people in other towns is just as critical and that they also need food and medical care,” Defourny said.

Every day, displaced people arrive in the state capital Maiduguri, reporting great difficulty in accessing food in the communities they are fleeing. In addition, there are cases of measles among the new arrivals, indicating that an epidemic is underway.

MSF is conducting other exploratory missions when and where it can, as insecurity is a major issue. Towns such as Bama and Dikwa and other areas close to the front line are vulnerable to attack by Boko Haram, and access is limited.

Meanwhile, with the influx of people to Maiduguri, the city’s hospitals are overwhelmed and have to turn patients away. Recently, six newly arrived children with measles could not be hospitalized and were sent back to a camp, increasing the risk of further infections. An MSF team is working to increase the city’s hospital capacity, Defourny said.

MSF has been working in Maiduguri in Borno State since August 2014. The organization runs two clinics, a nutrition center, and a health center in one camp and provides medical consultations. In recent months, MSF has developed large-scale projects to ensure water supply and acceptable standards of hygiene in camps in Maiduguri and continues to conduct epidemiological surveillance of people living in them. In 2015, MSF carried out more than 116,300 medical consultations, assisted 1,330 deliveries, and treated 6,000 undernourished children.