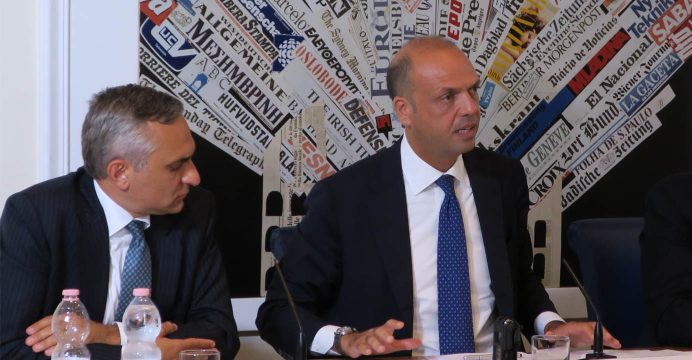 “AWARE MIGRANTS,” an information campaign jointly developed by the Italian Ministry of Interior and the IOM Coordination Office for the Mediterranean in Rome, was launched yesterday (28 July). It aims to raise awareness among potential migrants about the dangerous journey across the desert and the Mediterranean. The campaign mainly consists of videotaped stories and accounts narrated by migrants themselves.

“Information is empowerment,” said Director of the IOM Coordination Office for the Mediterranean Federico Soda. “This campaign was born and established on this principle. As IOM, our experience and proximity to migrants make us aware of the risks that they undertake to reach Europe. The vast majority tell us that the journey was far more dangerous than they expected. More precisely, many are unaware of the dangers and risk of migrating assisted by smugglers, not only at sea or in the desert, but also in transit countries like Libya.”

He added: “This is constantly confirmed by our staffers, who work directly with migrants and hear their stories. Recalling all these memories about the life-threatening risks along their journey is often taboo; migrants wish to forget and go forward with their lives, and they do not share their experience with peers who are still at home.”

IOM feels a social responsibility to those that do not know, but should, and with Aware Migrants, IOM seeks to inform them about the risks and the dangers through migrants themselves, he noted.

“We are particularly concerned about gender-based violence and the risks taken by ill-informed unaccompanied minors,” he said. “We have a moral obligation to inform them in detail about what the journey is really like and they have the right to make a more informed decision,” he said.

Italy’s Interior Minister, Angelino Alfano, echoed those sentiments. “The only way to handle migration is to take action on multiple fronts. This campaign completes our overall strategy to manage this phenomenon in an orderly way,” he said.

“The message of the campaign is very clear: ‘Be aware, migrants, your dreams of a better life in Europe might turn into a nightmare.’ Sexual violence, child abuse, the risk of dying at sea, the risk of seeing your dearest relatives die at sea: potential migrants have the right to be informed of all these risks,” he added.

The campaign’s social media, in particular Facebook, but also YouTube, Instagram and Twitter accounts, will give migrants the opportunity to exchange opinions and experiences, share pictures, videos and other types of testimonies gathered throughout the journey. The campaign will also use radio and TV to convey its messages.

African artist Rokia Traoré will also write an official song for the campaign: “Be aware brother, be aware sister,” to further disseminate the initiative.

Said Soda: “We want to give migrants themselves the chance to speak out and warn their peers, friends and family back home through their own accounts of the journey. The main channel of communication of the campaign will be social media, since it is extremely popular among potential migrants and often plays a significant role in the decision making process of leaving one’s home country.”