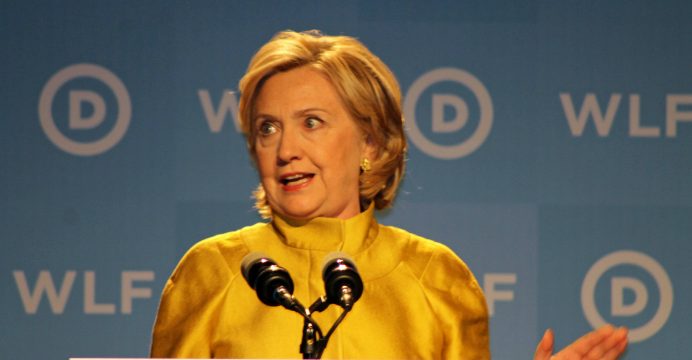 Who accused by Hillary Clinton of hacking DNC?

“We know that Russian intelligence services hacked into the DNC and we know that they arranged for a lot of those emails to be released and we know that Donald Trump has shown a very troubling willingness to back up Putin, to support Putin,” Clinton said in an interview with “Fox News Sunday.”

The United States has not publicly accused Russia of being behind the hack of Democratic Party computers. Cyber security experts and U.S. officials, however, said they believed Russia engineered the release of the emails to influence the Nov. 8 U.S. presidential election.

Asked if she believed Putin wanted Trump to win the White House, Clinton said she was not going to jump to that conclusion.

“But I think laying out the facts raises serious issues about Russian interference in our elections, in our democracy,” Clinton told Fox in the interview, taped Saturday.

The United States would not tolerate that from any other country, especially one considered an adversary, she said.

“For Trump to both encourage that and to praise Putin despite what appears to be a deliberate effort to try to affect the election I think raises national security issues,” she said.

The New York businessman has praised Putin, saying he was a stronger leader than U.S. President Barack Obama, a Democrat.

Trump last week invited Russia to dig up tens of thousands of “missing” emails from Clinton’s time at the U.S. State Department. “Russia, if you’re listening, I hope you’re able to find the 30,000 emails that are missing,” Trump told reporters.

The Republican presidential nominee for the Nov. 8 election later said he was being “sarcastic” in his comments, which raised concerns among intelligence experts and criticism that Trump was urging a foreign government to spy on Americans.