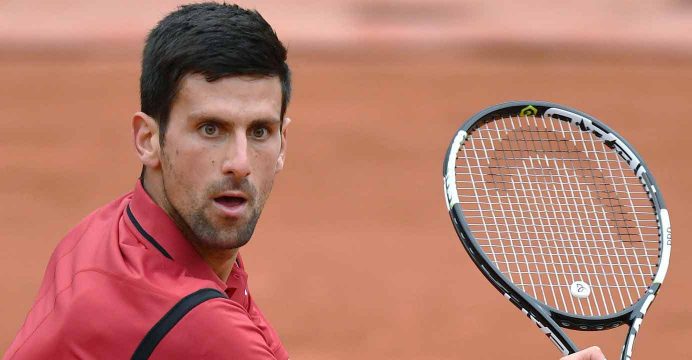 Novak Djokovic said he needed some luck to escape on Friday with a 7-6 (8/6), 6-4 victory over Tomas Berdych for a place in the semi-finals of the ATP Toronto Masters.

The top seed with three Canadian titles was tested in a 71-minute opening set but survived before motoring to victory over a top 10 rival he has now beaten in 25 of 27 meetings.

But it was not all one-way traffic for Djokovic, who struggled to close out a testing tiebreaker.

Berdych showed his desire by winning five consecutive points from 1-3 down in the first-set decider, only to miss on three set points as he finally handed over the set to his opponent.

Djokovic earned a second-set break for 2-1 and rode the margin to his eventual victory in a match which was well below his best level.

“I don’t know how I got out of that tiebreak,” Djokovic said. “I guess I was just able to focus on the next point.

“Tomas had a double-fault (on set point) and some errors. I was very fortunate to win that first set.

“I really had some relief going into the second.”

Although he’s still recovering from the rib problems which forced him out of the fourth round of Wimbledon, Asia’s top player won his 39th match of 2016, fighting back in the third set after losing the second and lifting his record over Dimitrov to 3-0.

Wawrinka was in full flow against Anderson as he swept the opening set in a master-class display.

Anderson, ranked 34th, has yet to reach the final four at the Masters 1000 level, losing in all seven of his attempts.

Wawrinka needed just 73 minutes to dispatch Anderson, who was limited to six aces and dropped his serve four times.

“It was a really good match, I started really well the first game,” Wawrinka said.

“It’s one of the best matches of the year I’ve played. It showed me that I was ready, aggressive, moving really well. I was calm, served very good and mixed up my game.”

Two-time Grand Slam winner Wawrinka, the world number five, is chasing his fourth title of the season after success at Chennai, Dubai and Geneva.