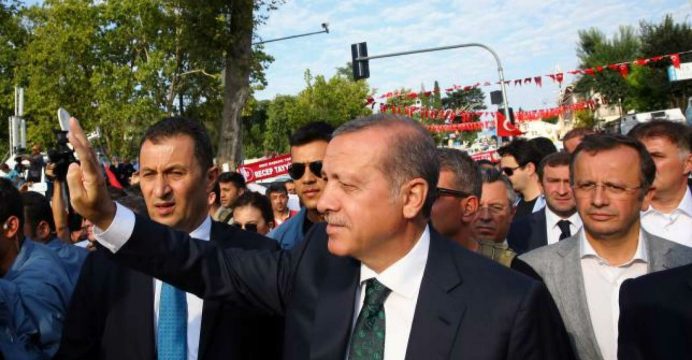 Supporters of Turkey’s ruling and main opposition parties, usually bitter foes, were set to rally together on Sunday in support of democracy following a failed military coup as President Tayyip Erdogan tightens his grip on the country, reports Reuters.

In another demonstration of unity after the coup, which was staged by a faction within the armed forces, the head of Turkey’s air force issued a rare statement stressing “absolute obedience” to the chief of the military General Staff. Some members of the air force were involved in the coup.

The chief of the military General Staff, Hulusi Akar, who was held hostage by the plotters on the night of July 15, condemned the plotters on Sunday as “cowards in uniform” who had greatly harmed the nation and the army.

Erdogan, who narrowly escaped capture and possible death during the attempted coup, has declared a state of emergency, allowing him to sign laws without prior parliamentary approval in a drive to root out supporters of the coup.

Critics of Erdogan fear he is using the abortive coup to wage an indiscriminate crackdown on dissent. Turkish authorities have suspended, detained or placed under investigation more than 60,000 soldiers, police, judges, teachers, civil servants and others in the past week.

Turkish Prime Minister Binali Yildirim said on Saturday authorities had taken around 13,000 people into custody over the coup attempt, including 8,831 soldiers. He pledged they would have a fair trial.

Rights group Amnesty International said it had received credible evidence of detainees being subjected to beatings and torture, including rape, since the coup attempt.

“It is absolutely imperative that the Turkish authorities halt these abhorrent practices and allow international monitors to visit all these detainees in the places they are being held,” said Amnesty’s Europe director John Dalhuisen in a statement.

In his decree Erdogan extended the maximum period of detention for suspects from four days to 30, a move Amnesty said increased the risk of torture or other maltreatment of detainees.

Erdogan has accused U.S.-based Muslim cleric Fethullah Gulen, who has many followers in Turkey, of masterminding the abortive coup. In his first decree Erdogan ordered the closure of thousands of private schools, charities and foundations with suspected links to Gulen, who denies involvement in the coup.

The foundations targeted include the Association of Judges and Prosecutors, a secular group that criticised a judicial bill drafted by the Islamist-rooted AK Party and now signed into law by Erdogan.

But demonstrators gathering for Sunday evening’s planned cross-party “Republic and Democracy” rally in Istanbul’s central Taksim Square will try to set aside such concerns for now in a spirit of unity following the failed coup, in which at least 246 people were killed and more than 2,000 injured.

“This coup attempt has shown once again how precious democracy and are freedoms for us all,” said Engin Altay, deputy head of the main secularist opposition CHP, which organised the rally.

“All 133 CHP members of parliament will be at Taksim. But we are not the only owners of democracy, everybody must come to the meeting and show the world how much democracy has been internalised (by Turks),” he told reporters.

The CHP and other political parties swiftly joined the ruling Islamist-rooted AKP in condemning the coup attempt, mindful of four other military interventions in Turkey in the past 60 years. The last full-scale coup in 1980 led to mass arrests of politicians and others, torture and executions.

Taksim Square, like much of Istanbul and other cities, is awash with Turkish flags and CHP supporters were also carrying pictures of their hero Kemal Ataturk, the soldier who founded the secular republic on the ashes of the Ottoman Empire in 1923.

Supporters of Erdogan’s AKP, which has ruled Turkey since 2002, have generally tended to use religious symbols and rhetoric. But the coup has united both sides in a blaze of nationalist fervour. Istanbul’s AKP mayor, Kadir Toptas, has provided free public transport for the rally.

The chief of Turkey’s Air Force, Abidin Unal, issued a statement saying efforts were continuing “day and night to cleanse the Turkish armed forces of Gulenist terrorists and traitors who have became a tumour within our army.”

Turkey’s Supreme Military Council (YAS) will meet under Erdogan’s supervision on July 28. Erdogan told Reuters in an interview on Thursday that he would restructure the armed forces and bring in “fresh blood”.

After the coup, Western countries pledged support for democracy in Turkey, a NATO ally and an important partner in the fight against Islamic State, but have also expressed concern over the scale of subsequent purges of state institutions.