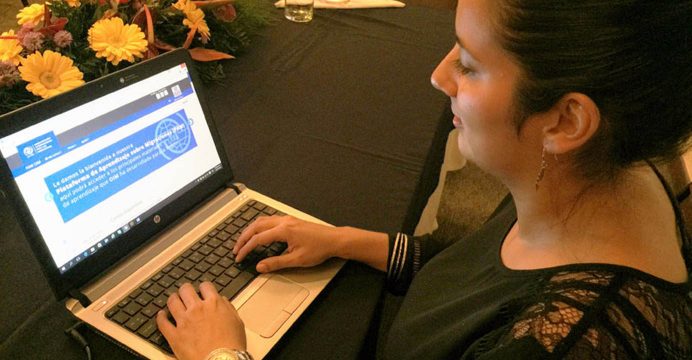 IOM has trained a group of 35 Mesoamerican counter trafficking specialists as trainers for its Virtual Course on Trafficking in Persons (TiP) developed for the region.

The training, which took place in Costa Rica on 20 and 21 July ahead of the World Day Against Trafficking in Persons on July 30, promoted information exchange between officials from Costa Rica’s National Coalition Against TiP, academics and officials from IOM offices in Costa Rica, El Salvador, Honduras, Guatemala, Mexico and Panama.

Mesoamerica is among the largest migration corridors in the world and is a region of origin, transit and destination for human trafficking. Of the 7,000 trafficking victims assisted by IOM globally in 2015, 5.6 percent were identified in Mesoamerica and the Caribbean, and 6.5 percent of victims originated from the region.

The Virtual Course on Trafficking in Persons covers basic aspects of TiP, relevant international and regional standards, approaches to intervention, indicators for detecting victims, and early intervention for surviving victims.

“This crime affects all of us. There is a personal, professional and institutional commitment to reaching all regions of Guatemala and neighboring countries through the use of this tool provided by IOM. We are committed to eradicating human trafficking,” said Sandra Ularte, Ombudswoman for victims of TiP in Guatemala.

The training also included an introduction to IOM’s Virtual Learning Platform on Migration, which hosts the TiP course, as well as training materials on other areas of IOM’s work, including human rights in international migration; unaccompanied and separated minors; management of labor migration and issues affecting migrant women.

This initiative is part of IOM’s Mesoamerica Regional Program, which is funded by the US Department of State. The program seeks to strengthen capacities to protect and assist migrants in vulnerable situations. Since March 2015 the program has trained over than 1,200 government officials and representatives of civil society on the prevention of trafficking and mechanisms for identifying and referring victims.