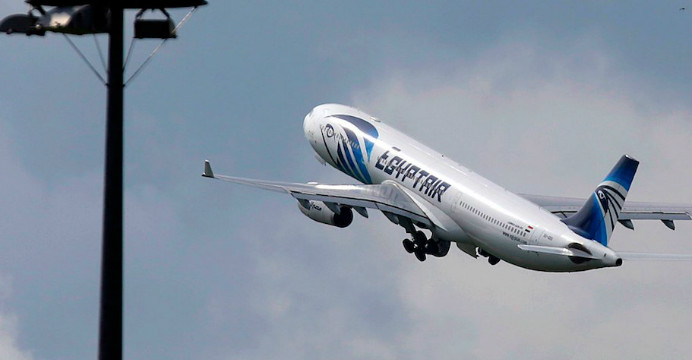 Crashed EgyptAir flight broke up in midair after fire erupted

An EgyptAir flight that crashed into the Mediterranean in May likely broke up in midair after a fire erupted in or near the cockpit, the New York Times reported on Friday, reports BSS.

However, it remains unclear whether the blaze was triggered by mechanical malfunction or a criminal act, Egyptian officials who spoke on condition of anonymity told the Times.

Last Saturday, an Egyptian-led investigative committee reported that the word “fire” could be heard on EgyptAir flight 804’s cockpit voice recorder before it crashed.

But the forensic and aviation officials in Cairo who spoke with the Times said that both the cockpit voice and flight data recorders, combined with the distribution and condition of recovered debris and human remains, had led them to their latest conclusion.

EgyptAir flight 804 was carrying 40 Egyptians, 15 French people, two Iraqis, two Canadians and one passenger each from Algeria, Belgium, Britain, Chad, Portugal, Saudi Arabia and Sudan. The Airbus A320 was en route from Paris to Cairo when it disappeared from radar over the Mediterranean.

The crash followed the bombing of a Russian passenger plane over Egypt’s restive Sinai Peninsula last October, killing all 224 passengers and crew.

The Islamic State jihadist group claimed responsibility for that attack, but there has been no such claim linked to the EgyptAir crash.