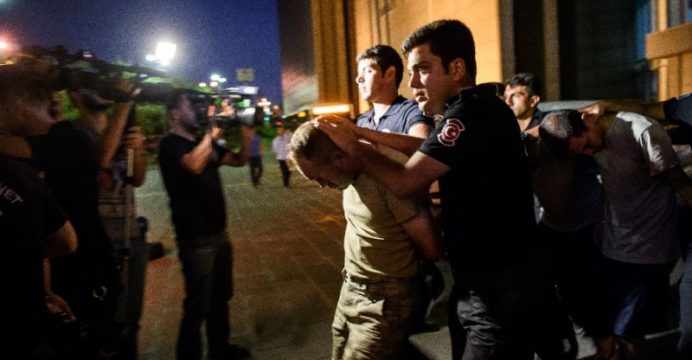 Turkish authorities pressed on Sunday with a ruthless crackdown against suspects in the failed coup against President Recep Tayyip Erdogan, with 6,000 people detained as he vowed to stamp out the “virus” of the putschists, reports BSS.

World leaders including US President Barack Obama have strongly condemned Friday’s attempted takeover but also urged Turkey to respect the rule of law in its aftermath, especially after pictures emerged showing the rough treatment of some arrested coup plotters.

Justice Minister Bekir Bozdag said on Sunday around 6,000 people had been detained in “clean-up operations” and that the number would rise. 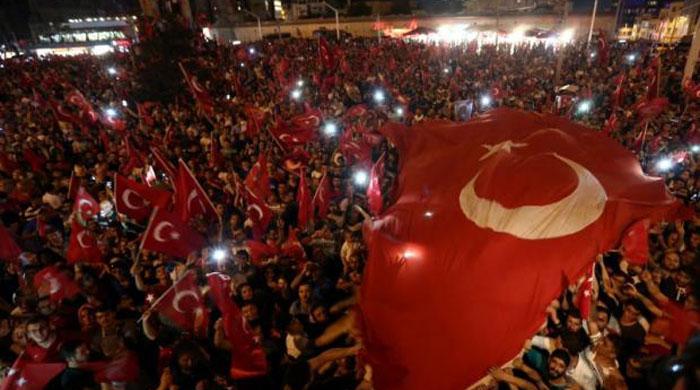 Turkey rounds up 6,000 suspects after failed coup against Erdogan

They include senior army commanders, judges, prosecutors and a military aide to Erdogan, Ali Yazici, who had only been working for the president since August last year, state-run news agency Anadolu reported.

The suspects are being charged with membership of an “armed terrorist organisation” and attempting to overthrow the government by force, the Hurriyet Daily News reported.

A resurgent Erdogan told a crowd of thousands at a funeral for the victims in Istanbul that there would be no let-up in the fight against his enemy Fethullah Gulen, the US-based Islamic preacher he accuses of running the “terrorist group” and masterminding the coup.

“We will continue to clean the virus from all state bodies because this virus has spread. Unfortunately like a cancer, this virus has enveloped the state,” he said.

The president broke down in tears at another Istanbul funeral — that of his friend Erol Olcak and his 16-year-old son, shot dead on the Bosphorus bridge while protesting against the coup on Friday night.

“Erol was an old friend of mine,” Erdogan told mourners.

Unable to control his tears, he said: “I cannot speak any further. Condolences to our nation.”

According to the government, 161 civilians and regular troops lost their lives in the bid by an army faction to overthrow Erdogan by seizing key strategic points in Istanbul and Ankara.

A total of 104 coup plotters were also killed, the military says. Turkish authorities have made clear they will show no mercy in the wake of the coup, which sparked fears of chaos in the strategic NATO country of 80 million people. It was the biggest challenge to Erdogan’s rule in his 13 years as prime minister and president.

The group behind the coup, which called itself the Council for Peace in the Homeland, said it was necessary to stop the increasingly authoritarian president from undermining Turkish democracy. But the 62-year-old leader successfully mobilised supporters into the streets to face down the plotters.

Thousands responded late Saturday to a new call by Erdogan to pour into the squares to celebrate the “victory of democracy”, with mass rallies of flag-waving Turks in cities including Ankara, Istanbul and Izmir.

“They may have tanks but we have our faith. We will not leave the squares… but we will continue defiantly,” said Erdogan.

Turkish television has shown images of captured suspects forced to lie face down on the tarmac after their arrest while AFP photographers have seen suspects roughly led away, pursued by angry mobs.

Air force brigadier general Bekir Ercan Van was also detained at the key Incirlik air base used by US forces for raids in Syria, along with a dozen other suspects.

Turkey shut down airspace around Incirlik as a security measure after the coup, forcing the US to halt its strikes in Syria.

But Pentagon spokesman Peter Cook said Sunday that operations against the Islamic State group had resumed from the base.

The putsch added to the turmoil in Turkey after a wave of deadly bomb attacks blamed on IS jihadists and Kurdish rebels.

Former chief of staff Ilker Basbug told Dogan news agency that Turkey should make a distinction between the coup planners and young soldiers “of 20 years old who may have been mistaken”.

But the crackdown is not restricted to the military, and Anadolu said warrants have been issued for 2,745 judges and prosecutors.

Those arrested are suspected of belonging to Gulen’s group, which Turkey dubs the Fethullahci Terror Organisation (FETO).

Gulen’s supporters say their group, which they call Hizmet (Service), is entirely peaceful.

Erdogan accuses Gulen of running a “parallel state”, and called on Obama to extradite the reclusive preacher from the United States to face justice.

In an interview with Haberturk television, Labour Minister Suleyman Soylu went even further, saying “the United States is behind the coup” and adding it had to hand over Gulen.

The preacher has categorically denied any involvement in the plot and suggested it could have been staged by Erdogan himself.

Obama has meanwhile warned Turkey there is a “vital need” for all parties to “act within the rule of law” in the aftermath of the coup.

French Foreign Minister Jean-Marc Ayrault warned Erdogan against using the failed putsch as a “blank cheque” to silence his opponents.

But there was no such concern from Russian President Vladimir Putin, who called Erdogan to wish for a “speedy restoration of strong constitutional order”.

Erdogan and Putin, who were feuding over the shooting down of a Russian jet until last month, will meet in the first week of August, Anadolu said.

Turkey has also demanded the extradition of eight people thought to have been involved in the putsch who landed in a Black Hawk military helicopter in Greece.

Authorities are seeking to get life back to normal, but the US on Saturday warned citizens against travel to Turkey due to uncertainty after the coup bid.