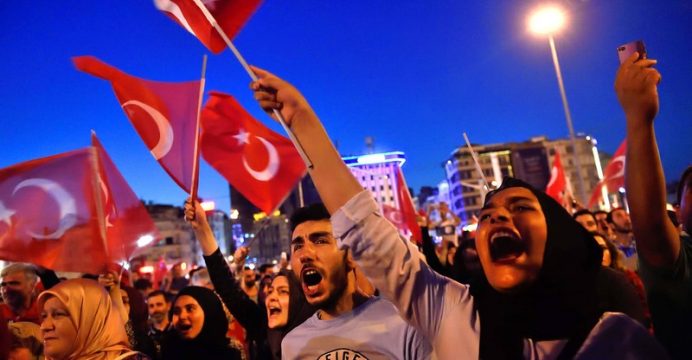 Thousands took to the streets of Turkey on Saturday in support of President Recep Tayyip Erdogan, after authorities crushed a military coup that claimed at least 265 lives, reports BSS.

After facing down the bloodiest challenge to his 13-year rule, Erdogan triumphantly addressed flag-waving supporters in Istanbul following Friday’s chaos in the strategic NATO member of 80 million people.

The authorities blamed Fethullah Gulen, a US-based cleric who is Erdogan’s arch enemy, for the plot and lost no time in rounding up 2,839 soldiers over alleged involvement, amid global alarm over the extent of the retribution. 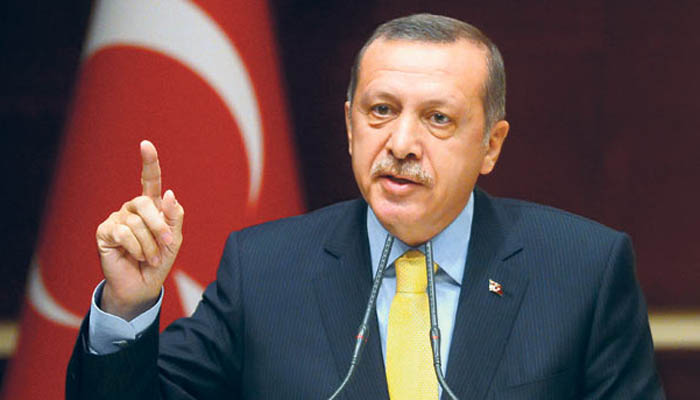 Thousands took to the streets of Turkey on Saturday in support of President Recep Tayyip Erdogan, after authorities crushed a military coup that claimed at least 265 lives

Turks woke up early Saturday to television pictures showing dozens of soldiers surrendering after the failed coup, some with their hands above their head, others forced to the ground in the streets.

“The situation is completely under control,” Prime Minister Binali Yildirim said outside his Ankara offices, flanked by Turkey’s top general who had himself been taken hostage by the plotters.

Describing the attempted coup as a “black stain” on Turkey’s democracy, Yildirim said 161 people had been killed in the night of violence and 1,440 wounded.

General Umit Dundar, who stood in as acting chief of staff while Hulusi Akar was being held by the rebels, said 104 coup plotters has been killed. Akar was later rescued in an operation that marked the end of the plotters’ hopes.

During a night where power hung in the balance, supporters of Erdogan’s ruling Justice and Development Party (AKP) defied the coup leaders’ orders of a curfew and flooded the streets to block the attempt to overthrow the regime.

On Saturday, thousands of jubilant supporters again mobilised in response to Erdogan’s call to fill Turkey’s squares, massing in Taksim in central Istanbul, the president’s home district of Kisikli, Ankara’s Kizilay Square and in the coastal city of Izmir, correspondents said.

Friday’s putsch bid began with rebel F-16 jets screaming low over rooftops in Ankara, soldiers and tanks taking to the streets and multiple explosions throughout the night in the capital as well as the biggest city Istanbul.

Parts of parliament were turned to rubble after being hit by air strikes from rebel jets. Rebel troops also moved to block the two bridges across the Bosphorus Strait in Istanbul, culminating in a stand-off with an angry crowd.

Turks have not seen such scenes since 1980 when the military led by general Kenan Evren ousted the government and many had no desire to revive these memories.

As protesters poured onto the streets, an AFP photographer saw troops open fire on people gathered near one of the bridges, leaving dozens wounded.

There was chaos in the city as angry crowds jeered the passing tanks, with much smaller numbers welcoming the troops.

With the coup defeated, Turkey rounded up its backers, from rank-and-file soldiers to generals, fuelling concern over the risk of summary justice. US President Barack Obama stressed the “vital need” for all parties to “act within the rule of law”.

While condemning the coup bid, German Chancellor Angela Merkel also said the plotters had to be dealt with “under the rule of law”.

General Erdal Ozturk, commander of the Third Army, has been detained while Alparslan Altan, one of 17 judges on the constitutional court, was taken into custody. Judicial authorities said 2,745 judges would also be sacked in the wake of the attempted coup.

In a call to his Turkish opposite number Saturday, US Secretary of State John Kerry offered Washington’s continued support, but also denounced claims by some Ankara officials that the US had backed the coup.

The president’s critics have long accused him of undermining modern Turkey’s secular roots and of sliding into authoritarianism — but he was believed to have won control of the military after purging elements who opposed him.

Turkey’s once-powerful military has long considered itself the guardian of the secular state founded by Mustafa Kemal Ataturk in 1923.

It has staged three coups since 1960 and forced out an Islamic government in 1997. Erdogan immediately pinned the blame on “the parallel state” and “Pennsylvania” — a reference to Gulen, his arch-enemy whom he has always accused of seeking to overthrow him, and calling for his extradition.

But Gulen “categorically” denied any involvement in the plot, calling the accusation “insulting”. Meanwhile, Turkey demanded the extradition of eight people thought to have been involved in the putsch who landed in a Black Hawk military helicopter in Greece.

Istanbul authorities have sought to get life back to normal by reopening the bridges to traffic and gradually resuming service at Ataturk International Airport, which was shut down by the plotters.

But Washington on Saturday warned citizens against travel to the country, suspending flights and banning all airlines from flying to the United States from Turkey due to uncertainty after the coup bid.

Turkish authorities also imposed a security lockdown at the Incirlik air base in the southern province of Adana used by US and other coalition forces in the fight against jihadists in Syria, the US consulate said.