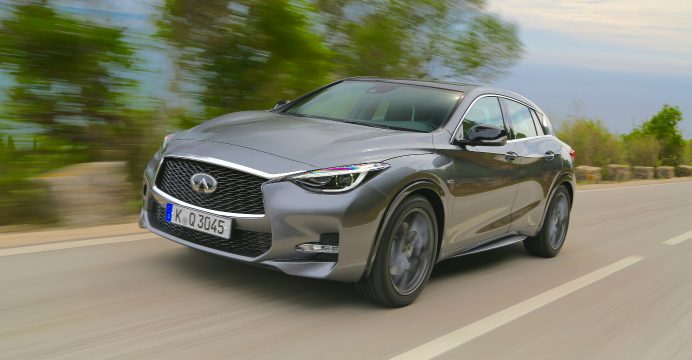 Infiniti finished the first half of 2016 with a new sales record. In Europe, the car manufacturer sold 9,535 vehicles in the past six months – up 177 percent over the same period last year. In June, 1,586 vehicles were sold across the continent, marking an increase of 154 percent.

Across the highly competitive EMEA region (Europe, Middle East, Africa), 16,251 Infiniti cars were sold in the first half of 2016 – up 45 percent compared to the results from the same period of 2015.

In June, 2,838 customers have bought a new Infiniti in EMEA – 46 percent more than in June 2015. The strongest model in Europe was again the premium active compact Infiniti Q30, which found 6,438 customers year-to-date.

Within Europe Infiniti was most successful in France: During this year, 2,190 Infiniti cars have been sold across the country so far – an increase of 260 percent in comparison to the same period of the year before.

With 1,208 vehicles cars sold, Infiniti in Germany was able to increase its sales by 152 percent compared to H1 of 2015. Furthermore, in June 124 vehicles were sold, making up an increase of 51 percent comparing to June 2015.

“We are very proud of the sales achievements we have made in 2016 this far,” said François Goupil de Bouillé, vice president of Infiniti Europe, Middle East and Africa.

“The results highlight the trust that customers have in our vehicles. With the QX30 premium active crossover, the newly upgraded Q50 sports sedan and the all-new Q60 premium sports coupe to be launched later this year, we are confident to continue our success in Europe.”

Worldwide Infiniti sold more than 110,200 vehicles in the first half of 2016, which corresponds to an increase of 7 percent over the same period last year.

In the month of June, more than 19,300 cars were sold, up 15 percent versus June 2015, and in the second quarter of the year (April-June), Infiniti set a new record with almost 53,000 vehicles sold representing an increase of 4 percent.