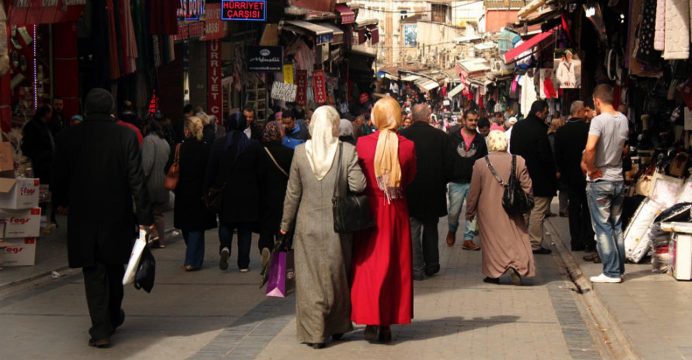 Despite a pick-up in domestic consumption, GDP growth slowed in Q1 because of slower inventory build-up, according to the July edition of the World Bank’s Turkey Regular Economic Brief*, issued today in Ankara. The seasonally and working day adjusted GDP growth slowed to an annualized rate of 3.3 percent q-o-q in Q1, as compared with 4 percent in 2015 as a whole. Inventory accumulation that led growth in the previous quarter slowed significantly in Q1, bringing growth down. Public investment declined somewhat to offset the current spending increase, and private investment weakened as well. Net exports had a negative impact, as imports grew faster than exports because of a stable Lira and stronger domestic consumption. Nevertheless, exports showed signs of recovery in Q1, following a contraction in the previous quarter, and contributed positively. On the other hand, private consumption strengthened thanks to a 30 percent rise in the minimum wage, recovery in consumer credit growth, and fall in food prices, while government spending rose considerably because of election promises.

The Brief also indicates that oil price-driven external adjustment is coming to an end. The 12-month gold-adjusted current account deficit narrowed by $13.3 billion to $29.9 billion (or 4.2 percent of GDP) between July 2015 and April 2016, thanks to a $12.4 billion decline in the energy deficit because of lower oil prices. However, the 12-month gold and energy excluded current account deficit has barely changed in this period. In the first four months of 2016, seasonally adjusted numbers point to a trend turn-around. On the positive side, exports excluding gold and energy increased because of stronger exports to EU and MENA markets, even though merchandise exports to Russia were in free fall after the impositions of sanctions in December 2015. On the other hand, imports excluding gold and energy recovered faster than exports because of stronger domestic consumption, leading to a deterioration in the 3-month core trade deficit. A slump in tourism due to Russian sanctions and security related issues exacerbated the negative merchandise trade developments. In addition, the rebound in global oil prices will slow the fall in energy deficit in the second half of the year, and reverse it eventually.

The Brief also notes that the Central Bank loosened monetary policy against the favorable inflation backdrop. The recovery in portfolio inflows and significantly lower headline inflation due to the fall in food prices created a favorable environment for the Central Bank to cut interest rates. The Central Bank cut the overnight lending rate by 175 bps to 9 percent between March and June, while keeping the 1-week repo and overnight borrowing rates unchanged. The fall in the average cost of Central Bank funding was passed on to loan rates with 70 bps and 100 bps drops in consumer and commercial loan rates, respectively.

Headline fiscal figures have improved but there are concerns about the underlying fiscal dynamics. The January-May central government surplus amounted to TL9 billion, reversing a deficit of TL2.4 billion a year earlier. However, the improving headline figures do not reflect the worsening fiscal dynamics. On the expenditure side, a significant decrease in capital and interest expenses more than offset the substantial rise in current transfers and the wage bill. In the revenue side, the increase in non-tax revenues has been faster than the slowdown in tax revenues, leading to an improved revenue performance. Therefore, one-off factors masked emerging developments so far, but arising pressures on both the revenue and the expenditure sides are likely to create long-term fiscal challenges.

The Brief maintains the growth projection at 3.5 percent for 2016. GDP growth sequentially slowed down in Q1, and early indicators for Q2 suggest moderation, in line with our baseline scenario described in our April 2016 TREN issue. For the remainder of the year, we expect private consumption to maintain its momentum and continue to be the main driver of growth. There may not be another wealth effect, which supported private consumption in 2015 because of the foreign currency deposits that gained in value when the Lira depreciated substantially, provided that the Lira remains stable this year. Similarly, the income effect from falling energy prices in 2015 is unlikely to be repeated. However, the stronger real wage growth due to the 30 percent rise in the minimum wage, recovery in consumer credit growth, and lower food inflation will compensate for the diminishing wealth and income effects. Government spending will continue to contribute significantly to growth, as we have seen in Q1. Private investment should recover somewhat in the remainder of the year, but contribute marginally to growth in 2016 as a whole. The strong domestic consumption and stable Lira will continue to support imports, while problems in exports markets will restrict export growth in 2016.

Headline inflation slowed rapidly in recent months, and core inflation is likely to decline in the next few months. However inflationary pressures are building up in the economy and will be visible towards the end of the year. The 30 percent increase in the minimum wage has already started to feed into wage growth in all sectors. Firms are likely to reflect the higher labor costs in process, though the exact timing and magnitude is not clear and will depend on the market forces. On the other hand, stronger wage growth is supporting private consumption together with the recovering consumer credit growth, putting pressure on process through the demand channel. In addition, food prices have been highly volatile in the past few years, and can make a comeback if weather conditions worsen. These pressures are not yet visible, but warrant a more cautious monetary policy to reaffirm commitment to price stability.

Turkey Regular Economic Brief is accompanied by a special Focus Note on Productivity Dynamics in Turkey. According to the Note, Turkey has witnessed a slowdown in economic growth since 2011, as private investment and productivity stagnated. This was in marked contrast to the previous decade, when total factor productivity (TFP) growth made a considerable contribution to GDP growth. Therefore, productivity dynamics deserve attention from researchers and policy makers searching for reasons for the growth slow-down and ways to reverse it. Using evidence from firm-level data from the manufacturing sector to investigate productivity dynamics in 2003-14.