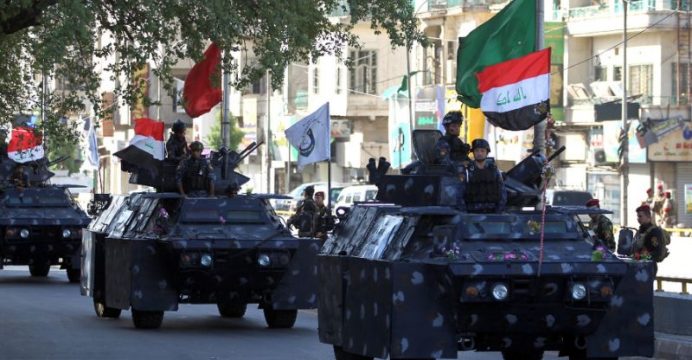 Iraq security forces paraded through Baghdad to celebrate victories over IS

Iraqi security forces paraded through Baghdad on Thursday to celebrate victories over the Islamic State jihadist group, but an unannounced rehearsal two days earlier put a damper on the festivities, reports BSS.

Prime Minister Haider al-Abadi reviewed the forces from a pavilion as they passed through central Tahrir Square, and military jets and helicopters overflew the city.

The parade was held to mark “the liberation of Fallujah and Ramadi and all the Iraqi territory that was liberated,” defence ministry spokesman Brigadier General Tahseen Ibrahim told AFP, referring to two key cities recaptured from the jihadists.

But an unannounced rehearsal for the parade held on Tuesday, in which many roads were closed and military vehicles drove through the city, inspired fear rather than celebration.

Some speculated on social media that it was a message to protesters planning a demonstration on Friday that Abadi has called on them to delay, while others speculated that it could be a military coup.

Iraq announced the full recapture of Fallujah, a city 50 kilometres (30 miles) west of Baghdad that had been outside government control for more than two and a half years, at the end of June.

Ramadi, the capital of Anbar province, was declared to have been recaptured at the end of December, but fighting in the area continued into this year.

More recently, Baghdad’s forces seized a key military base south of Mosul from IS that the Pentagon has said will serve as a “springboard” for the push to retake the last IS-held city in Iraq.

IS overran large areas north and west of Baghdad in 2014, but Iraqi forces backed by US-led air strikes and training have since regained significant ground.