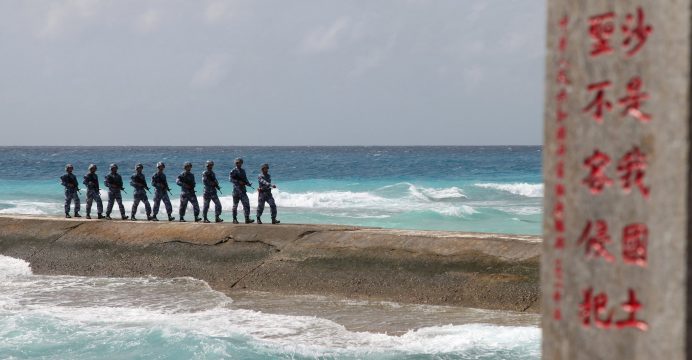 The United States is using quiet diplomacy to persuade the Philippines, Indonesia, Vietnam and other Asian nations not to move aggressively to capitalize on an international court ruling that denied China’s claims to the South China Sea, several U.S. administration officials said on Wednesday.

“What we want is to quiet things down so these issues can be addressed rationally instead of emotionally,” said one official, who spoke on the condition of anonymity to describe private diplomatic messages, reports Reuters.

Some were sent through U.S. embassies abroad and foreign missions in Washington, while others were conveyed directly to top officials by Defense Secretary Ash Carter, Secretary of State John Kerry and other senior officials, the sources said. “This is a blanket call for quiet, not some attempt to rally the region against China, which would play into a false narrative that the U.S. is leading a coalition to contain China,” the official added.

The effort to calm the waters following the court ruling in The Hague on Tuesday suffered a setback when Taiwan dispatched a warship to the area, with President Tsai Ing-wen telling sailors that their mission was to defend Taiwan’s maritime territory.

The court ruled that while China has no historic rights to the area within its self-declared nine-dash line, Taiwan has no right to Itu Aba, also called Taiping, the largest island in the Spratlys. Taipei administers Itu Aba but the tribunal called it a “rock”, according to the legal definition.

The U.S. officials said they hoped the U.S. diplomatic initiative would be more successful in Indonesia, which wants to send hundreds of fishermen to the Natuna Islands to assert its sovereignty over nearby areas of the South China Sea to which China says it also has claims, and in the Philippines, whose fishermen have been harassed by Chinese coast guard and naval vessels.