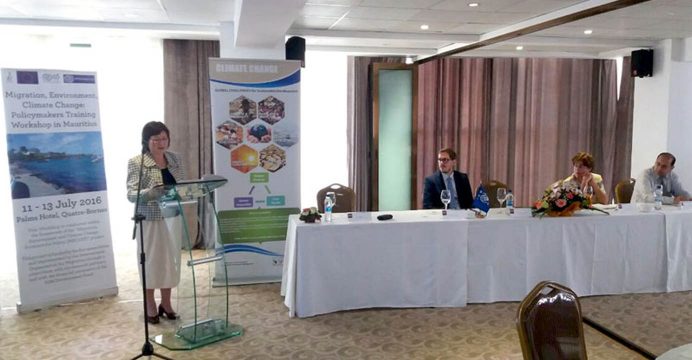 The European Union-funded workshop – organized in cooperation with the Ministry of Environment, Sustainable Development, and Disaster and Beach Management – will be attended by some 20 representatives from various ministries, academia and civil society. It aims to build the capacity of experts and practitioners on migration and environment, enabling them to propose concrete national policy and programmatic recommendations.

The hands-on workshop will include participatory and interactive sessions to allow an exchange of experiences and knowledge among participants. Findings from a recently conducted National Assessment Report on migration and its relationship to climate change, as well as the preliminary results of a household survey that identifies migration patterns and climate change adaptation strategies in Mauritius will also be presented, according Daniel Silva y Poveda, IOM’s Acting Head of Office in Mauritius.

“We will also use this opportunity to roll out IOM’s Training Manual on Migration, Environment and Climate Change, which is a facilitator’s guide providing a step-by-step roadmap on how to integrate human mobility into environmental policies, climate change and adaptation strategies,” he noted.

“Mauritius is no stranger to the complex nexus between migration and the environment. Due to their geographical locations in the South West Indian Ocean, the islands of Mauritius and Rodrigues are highly vulnerable to the extreme weather conditions, and are already facing the impacts of environmental and climatic changes; including irregular rainfall patterns, flash floods, storms, sea-level rise and coastal erosion, which affect local populations and livelihoods,” said Sin Lan Ng Yun Wing, Director of Environment at the Ministry of Environment and Sustainable Development.

The workshop, which is also supported by the IOM Development Fund, is part of IOM’s EU-funded “Migration, Environment and Climate Change: Evidence for Policy” (MECLEP) project, which aims to contribute to the global knowledge base on the relationship between migration and environmental change, including climate change. MECLEP is implemented in six countries: the Dominican Republic, Haiti, Kenya, Mauritius, Papua New Guinea, and Viet Nam.