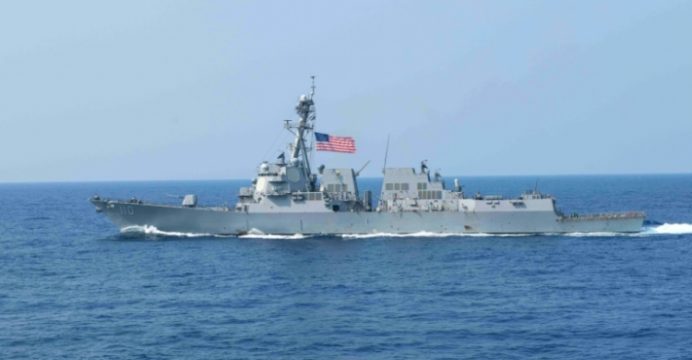 Beijing furiously rejected an international tribunal ruling on Tuesday that rendered its claims in the South China Sea invalid and dealt a devastating diplomatic blow to its ambitions in the resource-rich region, reports BSS.

China asserts sovereignty over almost all of the strategically vital waters, despite rival claims from its Southeast Asian neighbours, most notably the Philippines.

But on Tuesday a UN-backed tribunal in The Hague — the Permanent Court of Arbitration — ruled that China has no historic rights to the area.

Manila — which had lodged the suit against Beijing — welcomed the decision, as China, having boycotted the proceedings, said it “neither accepts nor recognises” the ruling. “The award is null and void and has no binding force,” China’s foreign ministry said on its website, reiterating its territorial claims.

President Xi Jinping said the islands have been Chinese territory since ancient times and Beijing will not accept any action based on the decision, according to the official Xinhua news agency.

The Asian giant’s Ambassador to the Netherlands Wu Ken was meanwhile quoted by Xinhua as saying “today is ‘black Tuesday for The Hague” and that “the ruling “dishonours international law”.

China’s claims, which include waters approaching neighbouring countries, are based on a vaguely defined “nine-dash-line” found on a 1940s Chinese map.

The row has embroiled the United States, which has deployed aircraft carriers and a host of other vessels to assert freedom of navigation in the waters — through which one-third of the global oil trade passes.

China says that its fishermen have visited the area for centuries,but the PCA tribunal said that under the UN Convention on the Law of the Sea (UNCLOS), Beijing had no exclusive control of it.

Crucially, it ruled that none of the Spratlys, a chain of outcrops in the south of the sea, were “islands” under the meaning of UNCLOS, and thus whoever had sovereignty over them — an issue it did not address — was not entitled to 200-nautical-mile exclusive economic zones (EEZs) of their own.

Some sea areas were therefore definitely in the Philippines’ EEZ, it said, as they were “not overlapped by any possible entitlement of China”.

China had violated the Philippines’ sovereign rights in its EEZ and the artificial islands Beijing has been furiously building in recent years — reshaping the area in an effort to bolster its claim — have inflicted severe environmental damage, it added.

BRANDED AS AN OUTLAW

The damning decision was “as unfavourable to China as it can be”, said Yanmei Xie, China analyst for the International Crisis Group.

The award by the five-member panel — chaired by a Ghanaian — “overwhelmingly favours the Philippines — a huge win,” said M.Taylor Fravel of the Massachusetts Institute of Technology.

China has consistently said the tribunal does not have jurisdiction on the issue and Xinhua reported the ruling under the headline: “Law-abusing tribunal issues ill-founded award”.

In Washington, the State Department said the ruling was an “important contribution” to resolving regional disputes and should be seen as “final and legally binding”.

China is a permanent member of the UN Security Council and has been seeking a greater role on the global diplomatic stage, and will not want to be seen as a violator of international law.

But how the decision could be enforced remains open to question, Richard Heydarian, a political analyst at De La Salle University in Manila, told reporters.

Beijing has held naval drills between the Paracels and the southern Chinese island of Hainan in recent days, while US Pacific Command said on Twitter that the aircraft carrier USS Ronald Reagan had launched flight operations to support “security, stability” in the South China Sea.

Bonnie Glaser of the Centre for Strategic and International Studies told AFP: “I expect a very tough reaction from China since it has lost on almost every point.”

China could choose to withdraw from UNCLOS, or begin building on Scarborough Shoal, which it seized from the Philippines in 2012 — which Washington would view as a provocation.

Beijing could also declare an air defence identification zone over the South China Sea, claiming the right to interrogate aircraft passing through the airspace, or try to remove a ship grounded by Manila on Second Thomas Shoal for use as a base.

The Philippines, which had lodged the suit in 2013, welcomed the “milestone decision”, and foreign secretary Perfecto Yasay said: “We call on all those concerned to exercise restraint and sobriety.”

Nationalist demonstrations are not rare in China, sometimes apparently with the tacit backing of authorities, and the Philippine embassy in Beijing has warned its citizens to beware of personal “threats”. Chinese police sealed off the street where the mission stands.