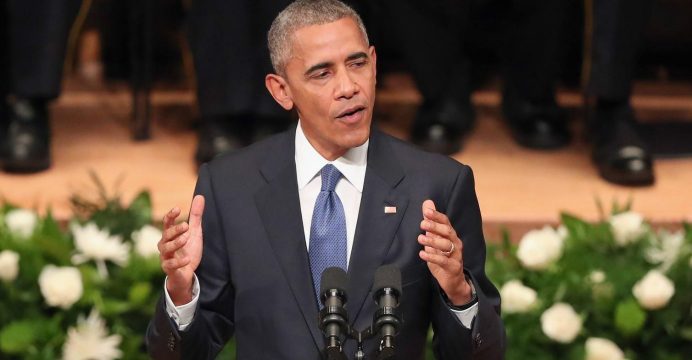 United States President Barack Obama implored Americans of all races to show more unity and understanding as he addressed an emotional memorial for five slain policemen in Dallas on Tuesday, reports BSS.

The president, accompanied by First Lady Michelle Obama, leaned heavily on scripture as he ministered to a country stunned by gun violence and torn asunder by race and politics.

“I know that Americans are struggling right now with what we’ve witnessed over the past week,” he said.

A succession of shootings, each racially charged, has led to a sense that “the deepest fault lines of our democracy have suddenly been exposed, perhaps even widened,” Obama said. 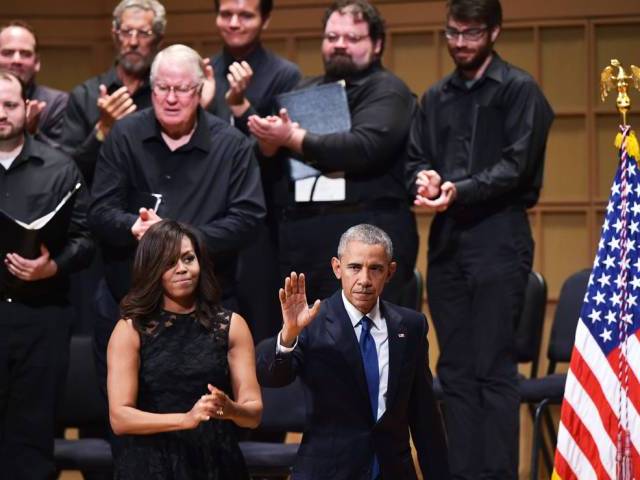 “I’m here to say we must reject such despair. I’m here to insist that we are not as divided as we seem.”

From Charleston to Orlando to last week’s ambush in Dallas, by a black gunman out to kill whites in retribution for police violence, the past year has seen a torrent of slaughter motivated by hate.

Obama’s speech included a frank admission that his own efforts to tackle violence, guns and racism had come up short.

“I have spoken at too many memorials during the course of this presidency,” he said with uncommon candor. “I’ve seen how a spirit of unity born of tragedy can gradually dissipate.”

Eight years ago, Obama’s rhetorical prowess made him America’s first black president and raised hopes that the country could overcome deeply entrenched societal divides. Tuesday’s memorial service showed a weary president whose hopes for change had been thwarted.

The way out, Obama said — suggesting work that will continue beyond his presidency — was for Americans to open their hearts to each other. Black Americans protesting police racism, he said, must understand how hard the police’s job can be.

“You know how dangerous some of the communities where these police officers serve are. And you pretend as if there’s no context?”

But Obama also challenged a mostly-white police force and white Americans at large to admit that while the edifice of legalized racism had gone, prejudice remained.

“We have all seen this bigotry in our own lives at some point,” he said.

‘WE FLOOD COMMUNITIES WITH GUNS’

“Too often we judge other groups by their worst examples, while judging ourselves by our best intentions,” said the Dallas resident.

But Obama, a Democrat, also made a call for Bush’s fellow Republicans to realize the cost of their opposition to gun control and spending on mental health and drug treatment.

“We allow poverty to fester so that entire neighborhoods offer no prospect for gainful employment,” Obama said, pointing to a string of causes for violence.

“We refuse to fund drug treatment and mental health programs. We flood communities with so many guns that it is easier for a teenager to buy a Glock than get his hands on a computer or even a book.”

Following the service, Obama met for more than an hour with families of the officers killed and wounded, along with Bush and Vice President Joe Biden, White House spokesman Josh Earnest said. The three men were accompanied by their wives.

Last week, the fatal police shootings of two black men, Alton Sterling in Louisiana and Philando Castile in Minnesota, prompted nationwide anger, with thousands of protesters taking to the streets from coast to coast.

They also seemingly motivated black Afghanistan war veteran Micah Johnson to carry out his deadly rampage in Dallas just as a protest against police brutality was wrapping up.

Before he was killed by a police robot, Johnson told negotiators he wanted to murder white cops in revenge for the black deaths.

The memorial paid a poignant tribute to the fallen “peacemakers in blue” –Brent Thompson, Patrick Zamarripa, Michael Krol, Lorne Ahrens and Michael Smith. Each officer was represented by an empty chair in the auditorium, adorned with a folded US flag and officer’s cap.