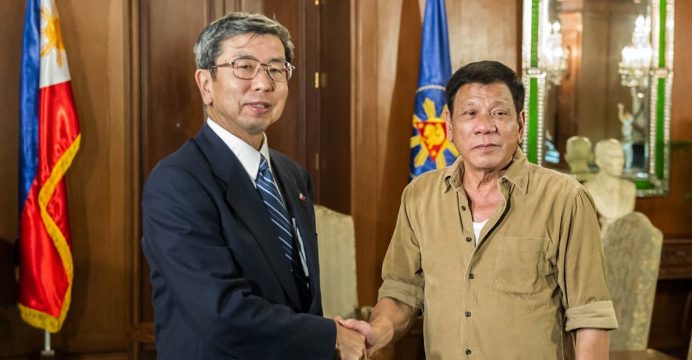 Mr. Nakao commended President Duterte’s early efforts to consult the private sector, civil society, and other partners to ensure a level playing field for all businesses, and uplift the lives of poor Filipinos, a fourth of the country’s population.

High priority will be given to supporting peace and development in Mindanao via road infrastructure rehabilitation, promotion of small- and medium-sized enterprises, and local government capacity building. ADB is collaborating with the Mindanao Development Authority, the Autonomous Region in Muslim Mindanao, and the Bangsamoro Development Agency, and other stakeholders.

In the first half of 2016, ADB approved loans for the Philippines amounting to $583 million for conditional cash transfers, water transmission improvement to Metro Manila and the vicinity, and water supply development in various municipalities. ADB is preparing $770 million in additional loans for the rest of the year, related to youth employment, local government financial management, and road improvement in Mindanao.

Based on further discussions with the new administration, ADB is ready to make additional increases to assistance in the coming years. ADB will also look for opportunities to increase its nonsovereign operations (loans, equity investment, and guarantees to the private sector).

ADB provided its first loan in the Philippines in 1969 to support private enterprise development, followed by a loan to support agriculture and rural development in Mindanao. Since then, it has provided $15.9 billion in sovereign loans, $1.6 billion in nonsovereign operations, and $92 million in technical assistance. In the aftermath of Typhoon Haiyan (Yolanda) in 2013, ADB provided $900 million for typhoon-affected areas.