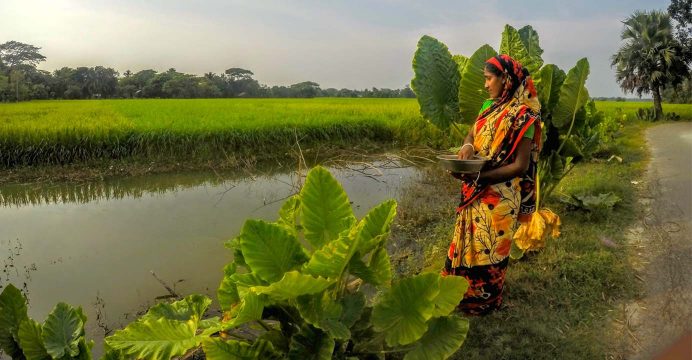 WLE (Water, Land and Ecosystems) is a global research program of international research consortium known as CGIAR (Consultative Group in International Agricultural Research). It emphasizes to work in river basin of trans-boundary rivers such as Mekong, Nile, Volta and Ganges to ensure ecosystems services from these great rivers. As livelihoods of majority of these river basin largely depends on healthy ecosystems and environmental flow of river.

The Ganges is one of the largest basin having 1.2 million km2 area where 655 million people lives and among them 30 % are below poverty level. It covers a large part of India, one-third of Bangladesh and whole of Nepal. However, agricultural productivity is one of the lowest in this region causing so much poverty of the farming community. To improve the agricultural productivity and livelihoods of the people of these area WLE has taken five project in this region for 2015-2016, of them one project on community water management has been taken in the polder of Baitakhata upazila, Khulna. WorldFish South Asia and Bangladesh office is coordinating all the five projects activities across India, Nepal and Bangladesh. In Bangladesh the project is led by IRRI along with partners BRAC, BRRI, IWMI, IWM, WorldFish, Sushilan and Blue Gold. 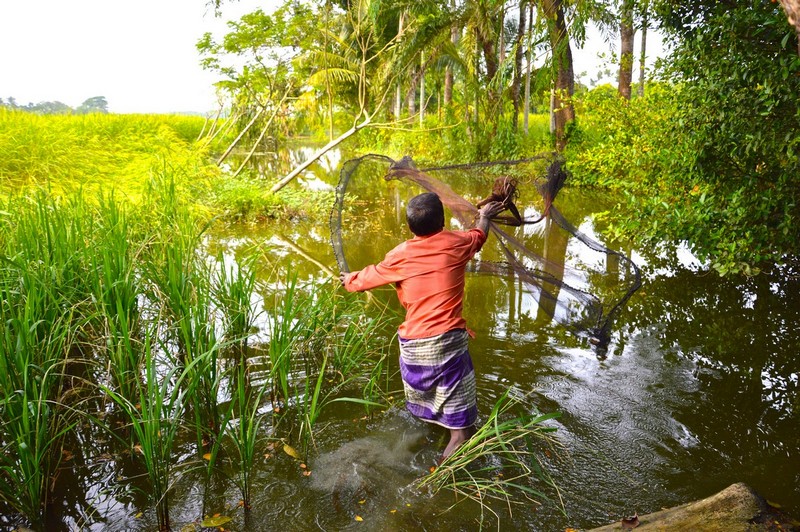 Bangladesh possesses 123 polders (earthen embankment encircling the land mass having sluice gates to control water) in its coastal belt to save agriculture and livelihoods from excessive tidal and saline water of rivers/sea. However, effectiveness of most of the polders has gone due to unplanned road and settlement within it, thus seriously hampering the drainage of water. Moreover, most of the sluice gates do not work and local water management organization (WMO) is almost non-functional due to lack of mentoring as well as funding.

Moreover, Climate change impacts are evident in the south-western coastal belt of Bangladesh. Farmers and fishers tell you every year water height is continuously increasing and elevated tidal water pressure with increasing salinity in dry season (February to May). Thus polder is often breached during full moon and new moon when tidal water pressure is at peak particularly in rainy season (June-September). Intrusion of excessive saline water (>8 dS/m) is detrimental to fruit trees, crops, fodder, sweet water fish, human, animal, fresh water plankton communities, and as a whole to ecosystems. 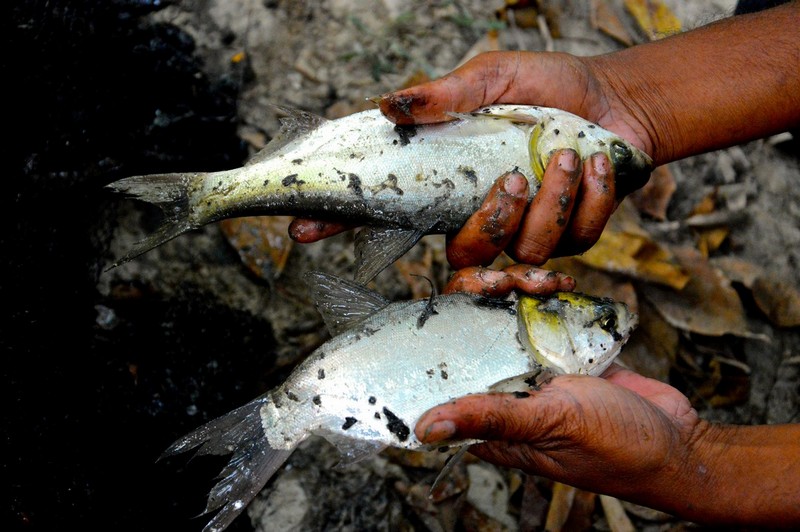 Additionally, soils are heavy having poor internal drainage as water is all across rivers and canals from where water enters in soils through capillary movement. Thus quick water drainage of water from land in post rainy season (called rabi season in Bangladesh) is hampered. Land is not ready for cultivation (called field conditions) for tillage to sow/plant seeds of wheat/maize/pulse or other crops. So the community is trying to sow seed by dibbling in soft soil without tillage. But again growth of germinating seed is poor due to excessive soil moisture. Moreover, HYV rice cultivation (whose yield is 1.5 times higher than local rice cultivars) is not encouraging for farmers due to low market price of HYV rice compared to local varieties.

Farmers face difficulties in multiple dimensions. Culturally farmers like the local rice varieties for its taste and multiple uses like for puffed rice, beaten rice and for making cakes. But farmers are trying to adjust the situation by planting saline tolerant sunflower crop to be used for cooking oil along with traditional sesame (oil crop) and local mungbean/water melon/cowpea. Thus this year farmers got about 1.2t/ha yield of sunflower with a return of 24,000 BDT/ha costing about 10,000 BDT/ha. However, cultivation of fish with local rice is showing promising results. Through current WLE project farmers of the total community (more than 160 families) reared different carps and Tilapia in 18 hectares of land. Due to feeding of fish farmers don’t have to weed the rice field as growing fish has eaten those as their nutritious feed. So, rice growth and yield was excellent. Every week (December-January) farmers are catching fish for giving to families in rotation and selling portions for cash money which would be saved for next year fish cultivation. The area has large water bodies (mainly long canals) but never used for fish cultivation. They have already sold 6000 kg in the local Khulna market and earned 372,000 BDT and consumed about 2000 kg. So, rice-fish cultivation on the one hand is increasing farmer’s income and on the other hand giving nutrition to women, children and men. As the year of initiation (2015) and suspicion farmers were late (September) in releasing fish fingerlings to rice field thus yield was comparatively low. 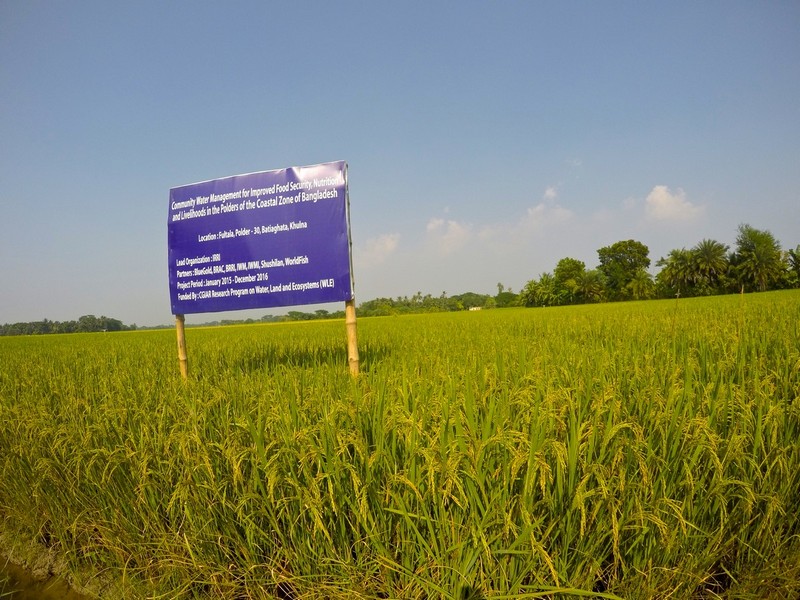 From this experience farmers want to release fish fingerlings in right time (July) in 2016 to achieve maximum fish yield potential having more profit margins. Thus monsoon rice along with fish cultivation and sunflower growing in rabi season can bring happiness among the farming community of coastal belt of Bangladesh and could be one of the potential means to adapt with increasing water/climate change. Finding this success of the project Blue Gold (Dutch Organization) is planning to replicate this model of Rice-Fish/Rabi crops to other polder areas of Bangladesh. However, for sustainability, the work should be continued for several years with increased community engagement along with hands-on training to transfer the technology effectively.