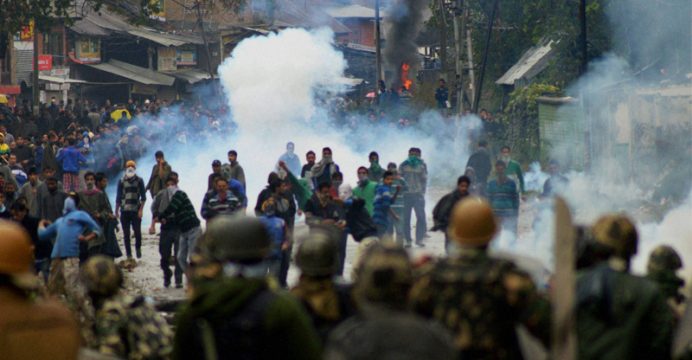 Protesters and government forces in Indian Kashmir clashed for a second day on Sunday as anger over the death of an influential rebel leader boiled over, with 18 people killed in some of the worst civilian unrest to hit the region since 2010, reports BSS.

Another 200 people have been wounded in the violence, many of them protesters who were hit when government forces fired tear gas canisters and live ammunition on Saturday.

Among the 18 dead was a police man who drowned when angry protesters pushed an armoured vehicle into a river in the southern district of Sangam on Sunday, a police officer told reporters on condition of anonymity. 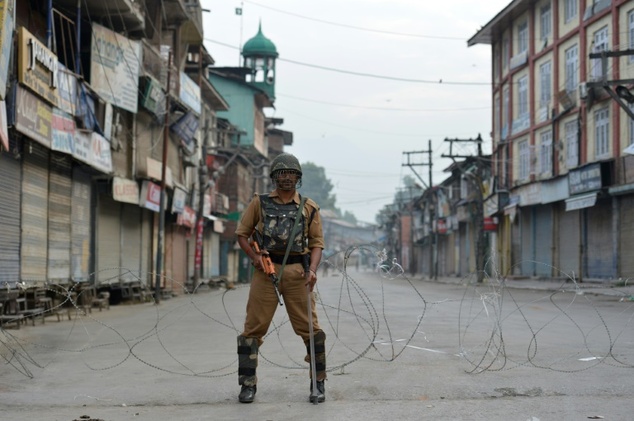 An Indian paramilitary troop stands guard during a curfew in Srinagar on July 10, 2016

Thousands of residents of the disputed region are defying a government-imposed curfew to take to the streets in protest at the killing on Friday of rebel leader Burhan Wani.

The state government, which has also cut off internet and mobile phone networks to try to stop the protests spreading, called for calm on Sunday.

“They (protesters) should not take their protests to a level where a man holding a gun is forced to open fire,” said spokesman Nayeem Akhtar.

There were also reports of security forces attacking hospitals and ambulances treating the wounded.

“Attacking hospitals and ambulances is a crime under the international humanitarian law and Indian armed forces have been repeatedly accused of this crime in Kashmir,” said the Jammu Kashmir Coalition of Civil Society, a rights group, in a statement.

Wani, a 22-year-old commander of Kashmir’s largest rebel group Hizbul Mujahideen (HM), was killed along with two other rebels during a brief gun battle with government forces.

Police say protesters have set police stations on fire and thrown rocks at army camps in the south of the restive region.

It is the worst civilian violence to hit the restive region since 2010, when mass protests broke out against Indian rule. Wani joined the HM rebel group at the age of just 15, and was viewed as a hero by many in Kashmir.

The state’s former chief minister Omar Abdullah tweeted after his death that he had become the “new icon of Kashmir’s disaffected”.

Witnesses said tens of thousands attended his funeral on Saturday despite the curfew, chanting independence slogans and firing pistol shots in his honour.

HM is one of several groups that for decades have been fighting around half a million Indian troops deployed in the region, calling for independence for Kashmir or a merger with Pakistan.

Kashmir has been divided between rivals India and Pakistan since 1947, but both claim the territory in its entirety. Tens of thousands of people, mostly civilians, have died in the fighting since 1989.

Violence has sharply declined in recent years following a major crackdown by the hundreds of thousands of forces deployed in the region.

But a recent uptick in militant attacks has galvanised frustrated young Kashmiris, many of whom deeply resent the military’s presence.

In recent months there have been several instances of protesters converging on the scene of gunbattles, throwing stones and hurling abuse at security forces to provide a distraction and enable trapped rebels to escape.