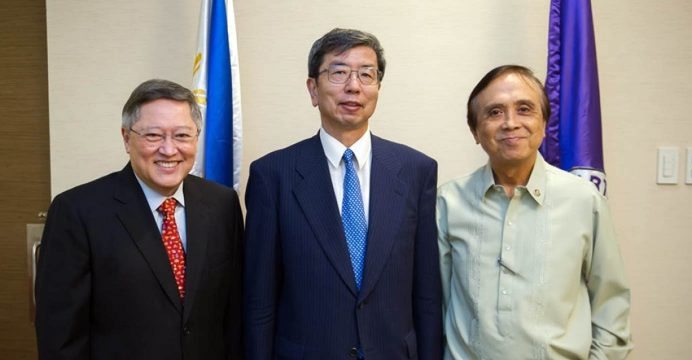 ADB president meets finance and planning secretaries of the Philippines

“The recent strong growth of the Philippines provides a foundation for further sustainable growth to fully realize this country’s enormous potential,” said Mr. Nakao. “Our support will be tailored to the government’s socio-economic and poverty reduction priorities, and to the country’s middle-income status. We are looking forward to further discussions on how we can best support the country.”

Mr. Dominguez said: “We believe the ADB’s full backing would go a long way in helping President Duterte deliver on his electoral mandate to bring progress to all Filipinos. This is because the strengthened partnership between the Bank and the Philippine government on the Duterte presidency would, as conveyed by Mr. Nakao, focus on key areas that the 10-point agenda itself aims to harness to enable our people to truly benefit from a strong economy that the ADB projects to grow beyond 6% in 2017.”

The Philippines has experienced strong economic growth in recent years. Gross domestic product growth was 5.9% in 2015, and is expected to rise to 6.0% in 2016 and 6.1% in 2017, due primarily to higher private consumption and investment. Unemployment is hovering at historical lows of 6.1% as of April 2016. But challenges remain to create better jobs and reduce underemployment especially in rural areas.

Mr. Nakao commended President Rodrigo Duterte’s administration’s aim of spreading the benefits of strong growth. The Philippines can harness its vast potential by tapping its young and educated population in pursuit of higher productivity and job creation, especially in such areas as small- and medium-enterprises, tourism and agri-business.

Based on the government’s prospective development plans, ADB is prepared to support areas such as (i) accelerating infrastructure development with special attention to the role of public-private partnerships; (ii) rural and value chain development in agriculture; (iii) improving human capital investment including health and education; and (iv) social protection through conditional cash transfers.

Mr. Nakao emphasized that ADB can help the country to incorporate innovations in infrastructure development, based on ADB’s extensive experience in countries and access to global knowledge and advanced technologies.

He reiterated ADB’s commitment to supporting the government’s efforts to bring lasting peace and development to Mindanao. ADB is actively working with local authorities to prepare the Mindanao Development Program, and on various projects to develop road infrastructure. These include the upgrading of national roads in central, southern and western Mindanao, which will improve the area’s linkages with national and regional markets.

ADB provided its first loan in the Philippines in 1969 to support private enterprise development, followed by a loan to support agriculture and rural development in Mindanao. Since then, it has provided $15.9 billion in sovereign loans, $1 billion in nonsovereign operations (loans, equity investment, and guarantees to the private sector), and $93 million in technical assistance. In the aftermath of Typhoon Haiyan (Yolanda) in 2013, ADB provided $900 million for typhoon-affected areas. ADB is targeting a record of more than $1 billion of approved sovereign loans in 2016, and is ready to increase assistance further based on discussion with the new administration.