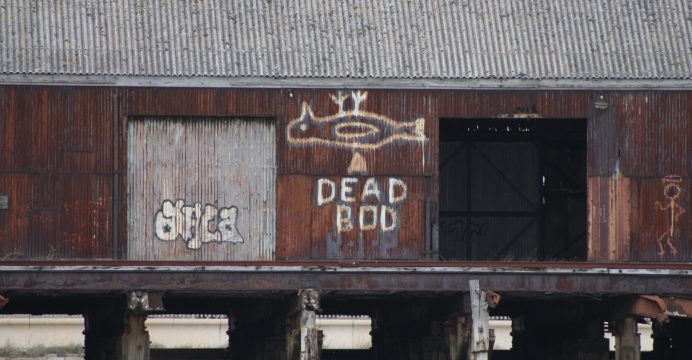 All ages, all sizes, men and women, all painted different shades of blue, and all stripped naked, took part in the Sea of Hull project, masterminded by New York artist Spencer Tunick.

The spectacle was part of a project to celebrate Hull’s relationship with the sea. It was commissioned by the city’s Ferens Art Gallery for Hull’s UK city of culture celebrations next year.

Roads in the city center were closed between midnight and 10 a.m. as the participants posed in historic locations.

The famous American artist has created other naked art projects in cities across the world, but later he told local media in Hull: “The Sea of Hull installation was one of the most fantastic projects I’ve ever done, and it was inspiring to be able to intertwine the city’s maritime heritage against an urban back-drop throughout the whole piece.”

“The photo incorporates some of the city’s unique locations including the architectural steel structured masterpiece that is Scale Lane Bridge, framed by Georgian and Victorian buildings adding to the striking shots captured during the installation,” said the artist.

The project consisted of seven photo-shoots in different parts of the city center as part of a project that will feature next year when Hull celebrates its City of Culture festival.

Volunteers for the project had to brave an early morning chilly dawn to enable the event to take place before the rest of the city awakened,reports Finland Times.

In one scene the usually busy Alfred Gelder Street in the heart of Hull resembled a wave of water as the volunteers lay down, giving the appearance of waves crashing down the street. In another scene a swing bridge was crowded with nude men and women to be photographed in another of the sequences. In the city’s Queens Gardens crowds formed a giant wheel representing water flowing around a ship’s wheel.

Tunick, who praised the naked volunteers for braving an early morning event, with the participants arriving from 3 a.m. local time, starting his photo shoot around 5 a.m..

He said: “It’s always wonderful to see the various sized people covered in paint walking through the streets of a city I admire. The crowds of blue people were a representation of the rising sea levels caused by climate change. It’s the idea that the bodies and humanity is flooding the streets, so there are many ways you can think about it.”

“I was very surprised to see so many older people take part and so many people who had problems walking, some with wheelchairs, crutches, leg braces. It was like the end of a war in a way, but they were resilient and we had young and old and I am so thankful to them. I’m looking forward to the exhibition of my final works made here in Hull, in the spring of 2017,” he said