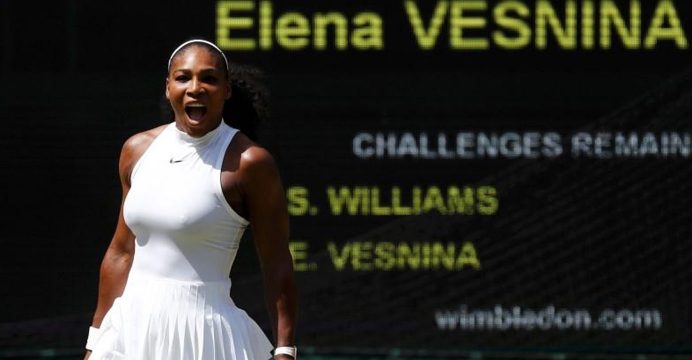 Serena on verge of 22nd major, again, after thrashing Vesnina

A Champagne cork popped somewhere on Center Court four games into Serena Williams’s Wimbledon semi-final and while it was a tad premature, her 6-2 6-0 thrashing of Elena Vesnina suggested she could celebrating something special come Saturday, Reports Reuters.

The top-seeded American will be taking nothing for granted, having seen her bid to match Steffi Graf’s modern era record of grand slam titles stuck one short on 21 for a year, but it was a menacing show of strength, albeit against an overawed opponent.

She dropped only three points on serve in an embarrassingly one-sided 48 minutes — crunching down one 123mph delivery that topped the women’s speed charts at this year’s tournament.

From the moment the 34-year-old nonchalantly broke serve in the opening game the writing was on the wall for a leaden-footed Vesnina who at least lasted three minutes longer than Dinara Safina did against Venus Williams in the previous shortest women’s semi-final in 2009.

By the time the latecomers shuffled to the seats two games later Serena was 3-0 ahead and her place in a ninth Wimbledon final, barring a tumble, was already looking a done deal.

She will land a seventh Wimbledon title if she beats Germany’s Angelique Kerber in a repeat of this year’s Australian Open final that she surprisingly lost in three sets.

If any more incentive were needed there is family honor at stake after fourth seed Kerber beat older sister Venus in Thursday’s second semi-final, denying the 36-year-old a first Wimbledon final since 2009 when Serena beat her.