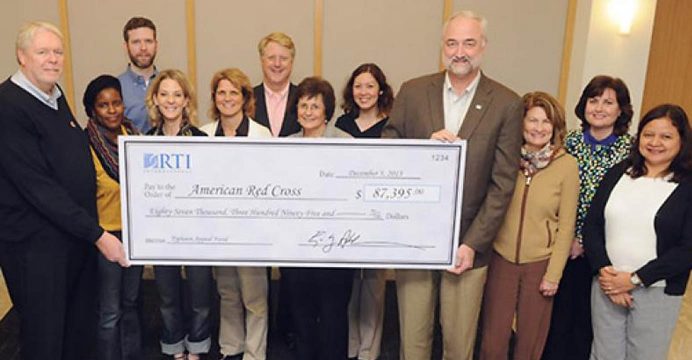 A strong commitment to giving back to communities in the Research Triangle Park area has earned RTI International a spot in the Triangle Business Journal’s 2015 list of largest corporate philanthropists.

The list criteria considered the dollar amount of giving in 2015, as well as in-kind giving and the number of volunteer hours worked. RTI’s total company-wide contributions in the Triangle area last year included an estimated $224,980 in funds and more than $58,700 from in-kind giving.

RTI’s unique and successful Community Partnerships Program is a big part of the philanthropy picture because it engages staff members as volunteers in their own communities to further RTI’s mission.

In fiscal year 2016, RTI provided $145,000 in corporate contributions to support 73 charitable organizations and efforts assisting citizens with basic and related needs. RTI staff members’ high number of volunteer hours (more than 3,360 reported hours in 2015), donations to the Red Cross and disaster relief funds, and participation and funding for organizations such as the United Way and the Food Bank are also noteworthy.

On a separate note, the publication has ranked RTI as No. 20 on the list of largest Triangle employers.

“RTI has a long history of investing in the communities where we live and work through donations of our time and through financial contributions,” said RTI President and CEO Wayne Holden, Ph.D. “Our executive team and staff regularly collaborate on ideas and programs with non-profit and charitable organizations. The Triangle community is stronger and healthier when we all come together to help those in need, and RTI will continue to be a champion for positive and lasting change.”

Holden added, “RTI is also pleased to be recognized by the Triangle Business Journal as one of the area’s largest employers, and we look forward to future growth.”

RTI will construct a new 190,000 square foot building on its main campus in the Research Triangle Park to facilitate future growth.