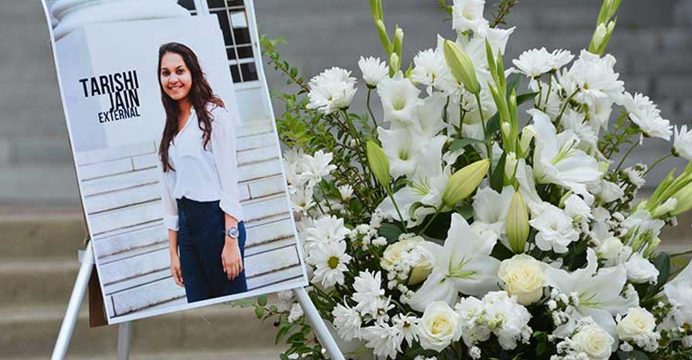 Under suitably somber skies, a few hundred students, staff and faculty gathered on Sproul Plaza on Tuesday to mourn the death, and celebrate the life, of Tarishi Jain, the Berkeley student killed in last week’s terrorist attack in Dhaka, Bangladesh.

“No words are adequate to express our pain and our grief,” said Chancellor Nicholas Dirks, addressing the crowd from the Sproul steps. “And yet, at this most difficult of times, we must also share an ongoing commitment to embrace and emulate all that Tarishi Jain exemplified and stood for.” 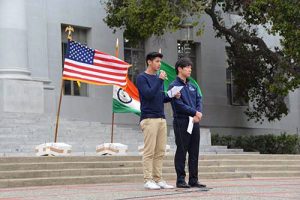 Throughout the hourlong vigil, those who knew her did their best — often through tears — to capture the spirit of the Berkeley sophomore, who was serving an internship in the Bangladesh capital arranged through the campus’s Institute for South Asia Studies. She was one of 20 killed in the attack on a local café.

“She was driven,” said Jay Sananvatananont, who knew her as a member of the International Students Association at Berkeley, or ISAB. “But that did not detract in any way from the kindness she showed to our ISAB family, and the meaningful relationships she built with everyone around her.

“Perhaps that’s why we’re all here today,” added Sananvatananont . “We all wholeheartedly know how beautiful a human being she was.” 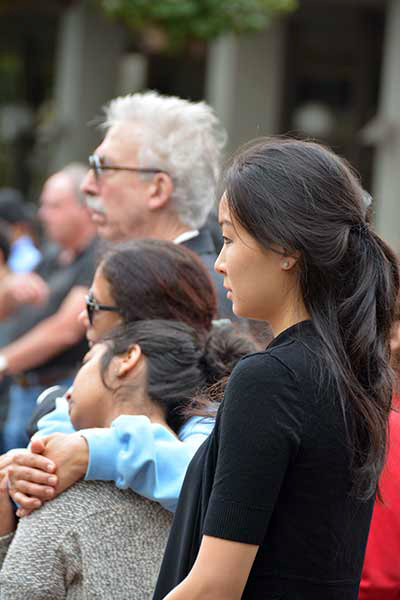 Chancellor Dirks spoke, then joined other mourners as Jain’s friends and fellow students took the microphone.

That sentiment was echoed by a group of women who lived in Jain’s residence hall during her freshman year, who described her friendship, her generosity, her commitment to social change and her penchant for Indian snacks. The line of mourners and celebrants taking the microphone also included Lawrence Cohen, the director of the Institute for South Asia Studies, and K. Venkata Ramana, of the Indian Consulate of San Francisco. Several read emotional messages from friends.

Jain, 19, was a graduate of the American International School in Dhaka who enrolled at Berkeley in 2014 intending to major in economics.