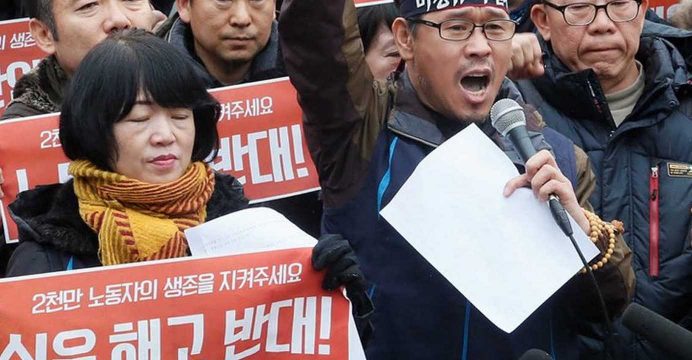 Judge Dam Shim of the Seoul Central District Court deemed that as President of KCTU, Mr. Han was ultimately responsible for the altercations between police and demonstrators during a rally that took place in November 2015, although Mr. Han had consistently called for calm and had dissuaded demonstrators from violence. Judge Shim also absolved the police of responsibility for the altercations, despite the fact that they had pre-emptively fired water cannons and tear gas directly at peaceful marchers, injuring dozens of demonstrators. Mr. Han remains in the Seoul Detention Center while his lawyers file an appeal against his sentence.

An arrest warrant was issued against Mr. Han in June 2015 for his participation in peaceful demonstrations that took place in April and May 2015 in solidarity with the victims of the sinking of the Sewol Ferry in 2014. Fearing he would be subjected to arbitrary detention, Mr. Han went into hiding for almost six months, briefly going out in public in November 2015 to participate in a rally to denounce proposed labour reforms. This rally resulted in altercations between the police and demonstrators, as police had deployed some 20,000 officers from 248 squadrons, 19 water cannons, 679 buses, and 580 capsicum spray devices, and took pre-emptive and aggressive action against those who were peacefully marching. After this rally, Mr. Han went back into hiding, but in December 2015 turned himself into the police after the latter threatened to storm the Jogye Buddhist Temple in Seoul where Mr. Han had taken refuge.

While in police detention, Mr. Han has sometimes been denied visitation rights, including from the General Secretary of the International Trade Union Confederation for Asia and the Pacific (ITUC-AP) in December 2015, due to unfounded police concerns “about the possibility of conspiracy and destruction of evidence”. The judicial harassment of Mr. Han continued, as prosecutors threatened him with potential sedition charges. Eventually the prosecution did not file sedition charges for lack of evidence, but did seek an unjustifiably long prison sentence against Mr. Han.

It is the first time such a harsh sentence is handed down in South Korea in relation to the participation in an “illegal rally”. [2] This sets a very worrying precedent for trade unionists and rights activists, who are systematically targeted for speaking out against government labour policies and workers’ rights violations.

In addition to Mr. Han, 19 other KCTU members and officers were detained and indicted in relation to the November 2015 rally. As of July 2016, 13 have been released on bail or suspended sentences, and the remaining six are still in custody awaiting the outcome of their trials. These include Ms. Tae-sun Bae, KCTU Director, and Mr. Sung-deok Cho, Vice President of the Korean Public Service and Transport Workers Union (KPTU), both currently on trial facing possible six-year and five-year prison sentences respectively.

Our organisations are also concerned for Ms. Young-joo Lee, KCTU Secretary General, who has taken refuge at the KCTU headquarters in Seoul since December 2015,in order to avoid being arbitrarily detained by the police, after the authorities issued a warrant for her arrest for participating in the demonstrations in 2015. After seven months of being enclosed in KCTU’s offices, Ms. Lee’s mental and physical health are of concern, but given the severe judicial harassment of Mr. Han, there is good reason for concern that Ms. Lee will face similar arbitrary detention and harsh sentencing if she were to leave the KCTU offices.

Our organisations condemn the ongoing repression, intimidation, and judicial harassment of labour leaders in South Korea, and in particular the unwarranted sentence against and arbitrary detention of Mr. Han and the pending arrest of Ms. Lee. We call on the South Korean authorities to overturn Mr. Han’s sentencing and put an end to the judicial harassment he is subjected to along with other labour activists, which aims at deterring the peaceful human rights activities of labour unions and workers’ rights organisations, and to allow them to exercise their rights to free association, assembly, and expression without hindrance or fear of reprisals.