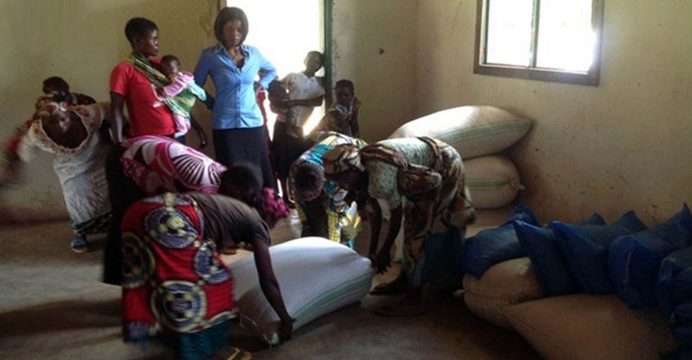 Over 750 women in the Democratic Republic of the Congo (DRC)’s volatile north-eastern province of Ituri have set up agricultural cooperatives and small businesses as part of an inclusive programme called ‘Peace is the way of Progress’ (Amani ni Njia ya Maendeleo in Swahili).

The cooperatives in Ituri’s Mambasa territory target vulnerable women from host and displaced communities, particularly women from the pygmy indigenous population. Wives of members of the police and army have also joined the cooperatives as part of efforts to foster closer community relations between the population and the authorities.

Mukena Musaneni, a pygmy woman living in the village Epulu, confirmed that joint agricultural activities have helped to alleviate some of the prejudices local Bantu women had against the pygmy community. “Working side by side for the cooperatives has brought us closer together,” she said.

Financed by the UN Peacebuilding Fund (PBF), this USD 2.5 million initiative brings together IOM and a consortium of four UN agencies – UNDP, UN Habitat, UNESCO and FAO – to engage communities in an inclusive dialogue on the root causes of conflict in the area, including land ownership and access to natural resources.

Community barzas and comités locaux d’eveil (where residents meet to discuss various aspects of community life) have also been set up to further efforts to anchor peace in the province through transparent and inclusive state institutions.

This includes the construction of fully equipped buildings for the Congolese National Police and training of police officers to improve trust and accountability between the police and the communities in which they serve.

The programme, which is supported by MONUSCO’s Stabilization Support Unit, revolves around three pillars: democratic dialogue, the restoration of the authority of the state, and reinsertion and reintegration of internally displaced people through economic recovery.

The Ituri province has been in the throes of inter-ethnic conflict since 1999. Most recently, violence by Mai Mai militias and rebel groups including the Democratic Forces for the Liberation of Rwanda (FDLR) and the Allied Democratic Forces (ADF) have forced large numbers of people to flee their homes.

“This programme has empowered a first group of women and has strengthened social cohesion by building a degree of trust between communities,” says IOM DRC Chief of Mission Jean-Philippe Chauzy.

“However, more needs to be done to build on the programme’s achievements so far and to support the government’s Stabilization and Reconstruction Plan for Eastern Congo,” he added.

IOM is currently working with its Congolese and international counterparts to promote and extend its peace and stabilisation efforts and ultimately end the spiral of violence in Ituri province.