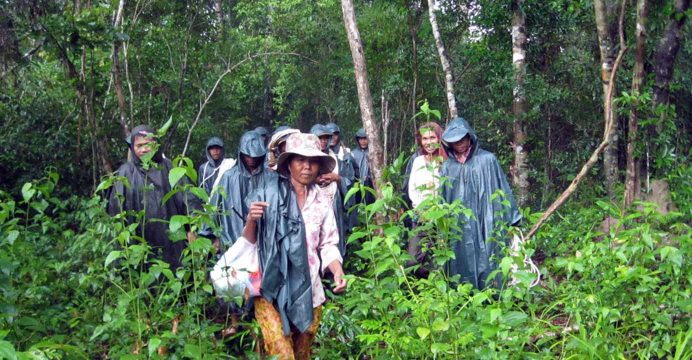 Opportunities and participation of women increased in the forest sector reform

A new study looks at the status of women in China’s forest sector reform and highlights the need to integrate the gender perspective in the reform policies in order to improve women’s access to forestland rights and participation in decision making.

According to the report titled Gender Dimensions of Collective Forest Tenure Reform in China jointly prepared by the World Bank team and the National Forest Economic and Development Research Centre under China’s State Forestry Administration, China’s forest sector reform is arguably the largest land-reform undertaking in modern times in terms of area and people affected. As a result, rural households have more independence in exercising their rights and interests in their forestland, more opportunities to increase incomes, and more incentives to cultivate, conserve, and manage forests. But gender equality remains a challenge.

“The study has highlighted some very important issues in China’s forest sector, particularly the greater role of women as men migrate to cities for jobs,” said Iain Shuker, World Bank’s Regional Manager of the Environmental Global Practice. “It also presents some income generating options for women in the forest and related sectors, and recommends policy actions to be considered for improving the property rights, income security and status of women in the rural areas.”

As a survey of 3,500 households in seven provinces conducted by the study shows, 95 percent of the land tenure certificates are signed by male heads of households. More than half of the decisions are made by men, with 45 percent made jointly and only five percent made solely by women. A woman is likely to lose her share of forestland if she moves to another village by marriage. The awareness of or level of access to forest subsidies, insurance and mortgage loans is generally low, particularly among women.

Based on the analysis of the data collected, the report makes the following recommendations that can help improve gender responsiveness and equality in the forest sector reform:

Improving the household contractual system for forestlands. Adoption of multi-signatory forestry tenure certificates and use of secret ballots in the new allocation of forestland would give women greater voice and allow them to express their preferences in decision-making. Village codes should ensure that women retain their share of forestland despite civil status change.

Improving forestry policies, incentives and services. Development of a legal framework for transfer of forest tenure should be accelerated. A standardized contract and an information disclosure system should be put in place. Local women’s federations can monitor and provide assistance as needed in cases where women’s forestry rights are infringed upon. Improved mortgage loan policies, forest insurance and microcredit programs can help expand women’s access to finance. Reforming forest subsidies to shift more government funding toward public services in technology extension, insurance and market information will provide women with more knowledge and skills needed for forestry activities.

Improving the gender sensitivity of policy making, dissemination and monitoring. Gender awareness training and workshops should be organized for forestry policymakers and implementers. Major national forestry policies should be reviewed from the gender perspective before being promulgated or amended. The gender dimension should be integrated into the reform’s monitoring program.
“Collective forest tenure reform has brought many socio-economic benefits, but gender issue is still one of the challenges. Women are disadvantaged due to a number of factors including policy design and implementation, education level, and traditional social norms,” said Xin Ren, World Bank Senior Environmental Specialist and the team leader of the study. “Therefore, the design and implementation of the reform policies need to be more gender sensitive in order to maximize the benefits of the reform for both men and women alike.”

The study was funded by the Umbrella Facility for Gender Equality, a multi-donor trust fund managed by the World Bank.